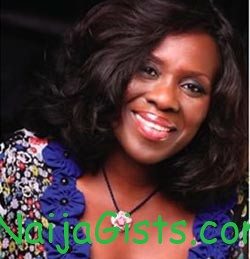 Joke Silva Jacobs– the wife of Nollywood veteran actor – Olu Jacobs is the godmother of the modern Nollywood. Many younger and older actresses regard her as a role model they look up to, and just like her husband, she is highly professional in what she does. According to Joke Silva biography records, the actress was born on the 29th of September, 1961. Joke was born as Joke Silva to a family of 4 children, she had her primary and tertiary education in Lagos and she is a graduate of English language studies at the prestigious University of Lagos. Joke Silva relocated to England to study drama at Webber Douglas Academy of Dramatic Arts.

Joke Silva and Olu Jacobs are presently the “Mr. and Mrs Nollywood”, the couple are regarded as the most professional and most experienced in the movie industry today. Olu Jacobs and Joke Silva met at the casting of Wole Soyinka’s novel – Jero’s metamorphosis at the National Theater during the 21st independence anniversary of Nigeria.

From the first day they met, they have become love-stocked and inseparable till now. Joke Silva has appeared in many movies and soap operas, the most popular among these are; secret laughter of women, letters to a stranger, 30 days, The Amazing grace, and white waters.

Joke Silva is presently a United Nation Ambassador and she also has several endorsements cut across all major industries in Nigeria. Joke Silva age is 52, she was born on the 29th September, 1961. Joke Silva Jacobs children rarely appear in the public, the two kids schooled outside Nigeria and they seem not have flare for their parents profession.

Joke Silva has won several nominations and awards in and outside of Nigeria; she has won the best movie actress in countless number of times.

Joke Silva Jacobs
Joke Silva does not appear frequently in movies, the veteran actress is selective when it comes to acting in Nollywood movies and she doesn’t compromise on her standards. Joke has featured in less than 20 movies and she has been at the fore front of women’s courses all through Africa, she has given several lectures on women empowerment.

Joke Silva is presently a United Nations goodwill ambassador, she gives seminars to young women in tertiary institutions and unlike her husband-Olu Jacobs, and Joke has not been into movies lately , she spends more time championing the course of women nationwide.