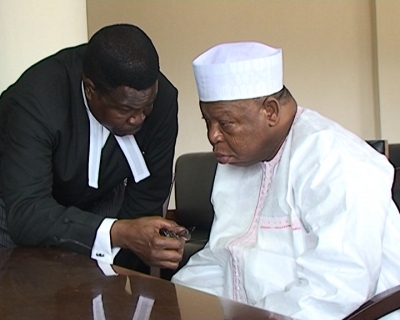 The Economic and Financial Crimes Commission, EFCC on Monday March 18, 2013 arraigned the former governor of Kogi State, Prince Abubakar Audu alongside a former Director General of the Directorate of Rural Development in his administration, Alfa Ibn Mustapha before Justice A.O. Adeniyi of the High Court of the Federal Capital Territory, Abuja.

The duo were arraigned on a 36-count charge bordering on criminal breach of trust and misappropriation of public funds to the tune of N10,965,837,040 (Ten Billion, Nine Hundred and Sixty-Five Thousand, Eighty Hundred and Thirty Seven Naira, Forty Kobo)

Audu and his co-accused pleaded not guilty to the charge when it was read to them, prompting the prosecution counsel, Rotimi Jacobs, SAN to request for a date for the commencement of trial.

One of the charges read: “that you Prince Abubakar Audu and Alfa Ibn Mustapha between 2000 and 2002 at Abuja in the Abuja judicial division of the High Court of the Federal Capital Territory while being the governor of Kogi state and Director General of Kogi State Directorate of Rural Development respectively, and in such capacities entrusted with dominion over certain property, to wit: an aggregated sum of N2,877, 487,690.88 meant for rural development in Kogi State committed criminal breach of trust in respect of the said sum which you falsely claim to be payment made to Aresanmi Technical Industries Limited in respect of the contract allegedly awarded Kogi State Directorate of Rural Development to the said Aresanmi Technical Industries Limited and you thereby committed an offence punishable under Section 315 of the Penal Code, CAP 532, Laws of the Federation of Nigeria 1990”.

However, counsel to the first accused, Mike Ozekhome, SAN, prayed the court to allow his client to return home on bail pending trial. He argued that the accused would make himself available for trial and that he would not jump bail. Counsel to the second accused, Prince Orji Nwafor Orizu also made the same plea for bail saying the two accused have been on administrative bail. But prosecution counsel, Rotimi Jacobs, SAN opposed the oral application, insisting that a formal application should be presented before the court.