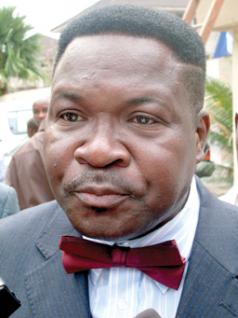 Gunmen suspected to be kidnappers on Friday abducted human rights lawyer, Mike Ozekhome (SAN) and his driver on the Benin-Auchi Road, Edo State even as they killed four policemen who attempted to prevent the abduction.The Divisional Police Officer in charge of Ehor Police Station who led the operation to foil Ozekhome’s abduction was reportedly shot in the hand and he is said to be receiving treatment in an undisclosed hospital.

Briefing journalists on the incident yesterday, the State Commissioner of Police, Mr. Foluso Adebanjo explained that “operatives of the command led by DPO Ehor division responded swiftly to a distress call at about 3:30pm that unspecified number of armed men had blocked the Benin-Auchi Road by Ehor axis.

“However, the patrol vehicle ran into ambush laid by the hoodlums, prompting an exchange of fire. At the end of the gun duel, the hoodlums escaped with bullet wounds but not without their victim who was later identified upon search on his abandoned vehicle, as Chief Ozekhome (SAN) and his driver.

“Regrettably, the command lost four officers in the encounter. We salute their rare courage and bravery for they fought and died as heroes for the course of humanity. Their death shall not be in vain. We remain undeterred in our fight against armed banditry”, he said.

Also commenting on the incident, the Force Public Relations Officer, Frank Mba, told journalists on telephone that the IGP had directed the Commissioner of Police to “commence immediate, vigorous manhunt for the hoodlums who must be arrested and brought to justice and the kidnapped victims rescued.”

“We therefore once again call on the general public not to relent in their partnership with the police to fish out the criminals as common enemy to our society and report anyone found with bullet wounds to the nearest police station”, he said.

It would be recalled that the State Police Command last Wednesday paraded 44 suspected criminals, including suspected kidnappers who allegedly abducted three female teachers in the state.

Meanwhile, Lagos lawyer and human rights activist, Mr. Festus Keyamo in reaction to news of the abduction of Ozekhome expressed shock, noting that the unfortunate incident had once again drawn attention to the poor security situation in the country

“It also highlights the state of joblessness among youths in our country which is one reason why they turn to this dangerous trade for their livelihood. I want to personally appeal to the kidnappers or their sponsors (if any), to kindly consider that Chief Mike Ozekhome, SAN has a family that rely on him, both nuclear and extended, and even other dependants in the society. I also appeal to them not to harm him in anyway,” Keyamo said.

[By From TONY OSAUZO, Benin]