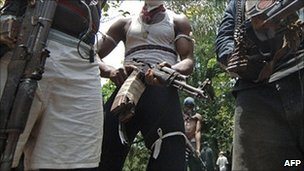 Chief Dennis Anaekwe, the traditional ruler of Enugwu Ukwu in Njikoka LGA of Anambra State has been kidnapped. naijagists.com

Some kidnappers kidnapped him at Abagana close to NTA studio.

According to Vanguard, the chief, who is second in command in Enugwu Ukwu traditional hierarchy, returned from Lagos weekend and was said to be visiting somebody at about 9.00 am when some unknown persons used their vehicle to block his own and dragged him out of his car to their own vehicle.

No official statement has been issued on the incident as the traditional ruler of Enugwu Ukwu, Igwe Ralph Ekpe, was said to be out of the country.

The kidnappers have also not reached any member of the family as his telephone was said to have been immediately switched off shortly after he was abducted.(vanguardngr)