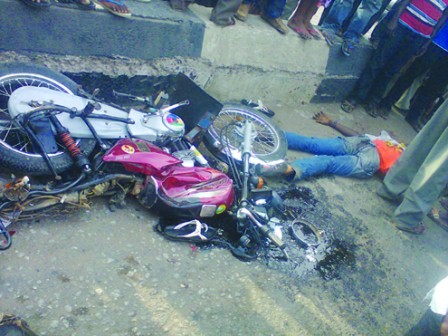 An okada rider identified as Rahman, has allegedly been chased to death by men of the Nigerian Police Force at Akowonjo Roundabout, Alimosho Local Government, Lagos, southwest Nigeria.

The deceased was crushed to death by a fast moving articulated vehicle at about 6pm, yesterday while trying to evade police arrest .

The sad incident resulted in traffic gridlock and motorists were stranded for hours as Okada riders in the vicinity went on the rampage to protest the death of their colleague.

The deceased, P.MNEWS gathered was said to be a tailor, who also rode the motorcycle in the evening after close of work to make some money.

An eyewitness told our correspondent that the deceased was trying to evade arrest by the policemen who were on patrol in the area, apparently to enforce restriction of okada on that particular road as specified by the Lagos Traffic Law.

“He was coming from Shasha end of the road en-route Akowonjo roundabout after close of work as a tailor when he ran into the policemen on patrol. Before then, he had only gone to make a U-turn from the same roundabout when he could not find a passenger to carry.

“In the process he ran into policemen and in an attempt to escape from the arrest he fell under the tyre of the articulated vehicle which crushed him.

“Other okada riders who were watching the development, immediately blocked the road and went after the policemen on patrol.”

A combined team of regular and anti-riot policemen restored normalcy after shooting in the air to scare away the rampaging youths and okada riders.

The Commander of “ Area M” command, Idimu, Assistant Commissioner of Police, ACP, Ibrahim Kaoje, who led the team of policemen to the scene, described the incident as unfortunate.

He urged the okoda riders and sympathisers on the need to maintain peace and order by not obstructing other people from going about their lawful businesses.

He said that the policemen are out to ensure security of lives and property of the citizens as well as ensure compliance with laid down rules and regulations without prejudice.