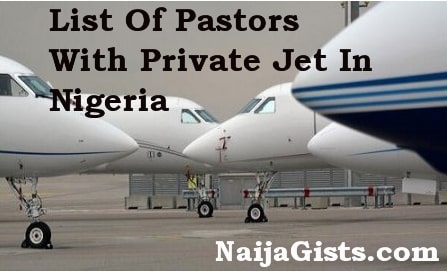 According to a recent United Nations report, Nigeria currently ranks as the “home of poverty” (country with the poorest people). While majority of the Nigerian populace wallow in abject poverty, a selected few have maintained a spot in the class of “world richest individuals”. One common indicator of wealth among the Nigerian elite class is ownership of private jets. Interestingly, a good number of Nigerian pastors happen to be members of this elite class. They own a good number of private jets currently plying the Nigerian airspace. In this article, we are going to be looking at the famous pastors and other wealthy Nigerian personalities who own private jets.

Acquiring and maintaining a private jet is not a child’s play. An average Bombardier costs in the region of $10 million (over 3 billion Naira). Also. as a private jet owner, you are required to pay for parking and maintenance costs for your jet(s). However, this has not deterred some Nigerians, especially pastors, from flying around in their private flying machines worth billions of Naira. Follow this article as we reveal to you all the pastors and other Nigerians, who own private jets.

Pastors With Private Jets in Nigeria

Pastor Chris Oyakhilome is a prominent Nigerian pastor. He is the founder of Christ Embassy (one of the biggest churches in Nigeria). The famous pastor reportedly bought his first private jet way back in 2006, making him one of the first set of Nigerian pastors to own private jets.

Late last year, around December 2017, it was widely reported that, the Pastor/televangelist was gifted a brand new private jet by an unnamed member of his congregation. This is no surprise, as Christ Embassy hosts many famous/wealthy personalities, from across the globe. The church is, without doubt, one of the largest in Nigeria, with many branches within and outside Africa.

According to recent estimates by Forbes, pastor Oyakhilome is worth in the region of $50 million (approximately 20 billion Naira). Apart from having one of the largest congregations in the world, Pastor Chris also has profitable investments in Real Estate, Hospitality, Media and so on.

Bishop Oyedepo is arguably the richest Pastor in Nigeria today. The Pastor is the founder of Winners Chapel (Living Faith Chapel), which has one of the largest congregations in the world. Bishop Oyedepo’s prominence is unrivalled, in terms of private jet ownership, among Nigerian pastors. The wealthy Pastor reportedly owns four private jets.

The famous Bishop’s fleet of jets include a VG450, Gulfstream G550 and two Bombardier jets. This fleet reportedly costs in excess of $100 million. Overall, the Bishop owns the second largest fleet of jets in Nigeria.

Reliable estimates, which include those of Forbes, have put the net worth of this wealthy Pastor in the region of $150 million (approximately 60 billion Naira).

Pastor Oritsejafor is one of the few private jet owners in Nigeria. The pastor is a former leader of CAN – Christian Association of Nigeria.

The former CAN leader, who is fondly called Papa Ayo by his wards, reportedly hires out his jet occasionally. In 2009, the jet was used by the Nigerian government, for money laundering and illegal movement of weapons from South Africa to Nigeria. The report generated serious controversy, which was trailed by severe backlash from several quarters.

On the trail of the controversial money laundering incident, Papa Ayo claimed the jet was only a gift from his congregation. Without doubt, the Warri-born Pastor is one of the richest Pastors in the country.

You probably need no introduction to this man. T.B Joshua is the founder of SCOAN – Synagogue Church Of All Nations. His congregation is probably the most culturally/racially diversed in Nigeria. Every weekend, T.B Joshua’s SCOAN headquarters in Lagos hosts thousands of worshippers from across the globe.

T.B Joshua is, without doubt, one of the wealthiest religious leaders in Nigeria. Although, not much is known about T.B Joshua’s personal life, he reportedly owns one of the most luxurious (expensive) private jets in Nigeria, a Gulfstream G550, which is estimated to be worth about $60 million.

The SCOAN founder’s magical exploits and prophecies, which are constantly aired on his church’s cable channel, Emmanuel TV, have earned him significant global recognition.

Of all Nigerian pastors, home and abroad, Pastor E.A Adeboye is the most revered. The highly celebrated Pastor is the General Overseer of Redeem Christian Church of God (RCCG). RCCG arguably has the largest congregation in Nigeria today.

Towards the tail end of 2017, Daddy G.O, as he’s fondly called by his church members, acquired a brand new private jet, a Gulfstream-G550, which is reportedly worth in the region of $65 million. Reports have it that, the jet was purchased for commercial function, to serve as part of the fleet of an airline.

Pastor Sam Adeyemi is, no doubt, one of the richest pastors in Nigeria. He is the founder of Daystar Christian Church, which is, today, one of the fastest growing churches in Nigeria. Reports have it that, he is one of the elite Nigerian pastors, who own private jets.

There is, however, a controversy surrounding the private jet ownership of this pastor. The Pastor once denied owning a private. However, according to a report by Forbes, he is one of the few pastors, who own private jets in Nigeria.

Bishop Mike Okwonkwo is probably the richest Pastor from the eastern enclave of Nigeria. He is the founder of The Redeemed Evangelical Mission. While not much is known about this pastor, reports have suggested that, he is one of the Pastors, who owns private jets in Nigeria.

Rich Nigerians Who Own Private Jets: All Private Jet Owners In Nigeria

It is important to state that, not only pastors own private jets in Nigeria. Other prominent Nigerian individuals, ranging from politicians to businessmen, also own luxury jets.

On Friday, May 12, 2017, the North Central city of Minna, Niger State, witnessed a heavy presence of air movements. On the said day, a total of twenty-six private jets touched down at the airport in Minna. The arrivals were prominent Nigerians, from far and wide, who came to honour the invitation of General Babangida, for his daughter’s wedding. Most of the owners of these private jets are relatively known individuals. This single event indicates that, a good number of Nigerians own private jets. Let us take a look at some of these personalities.

The ex-Governor’s fleet of luxury jets include three Gulfstream-4 jets, one Bombardier Global and the most expensive, Bombardier-G650. The B-G650 is reported to be worth in the region of $70 million

Ali Modu Sheriff is an ex-Governor of Borno State and a former senator of the Federal Republic of Nigeria. It was gathered that, the powerful politician owns four private jets; one G-650 and three Dornires luxury jets.

Asiwaju Bola Ahmed Tinubu, fondly called Jabagan, is arguably one of the most influential politicians today. He was the first Democratic-Governor of Lagos State. Tinubu is one the few owners of Private jets in Nigeria. He currently has two private jets, which are often available for hire to his political colleagues. Tinubu’s Bombardier luxury jet is said to be worth about $50 million.

While Jagaban has enjoyed a considerable success as a politician, he has enjoyed an equal (or even more) success as a business man. The ex-Governor has investments in hospitality, construction, transportation, real estates and so on.

Former Vice-President Alhaji Atiku Abubakar is, without doubt, one of the richest politicians today. He is also one of the few individuals, who own private jets in Nigeria.

About a month ago, the PDP presidential candidate conducted a meeting aboard his private jet. The meeting had in attendance prominent religious leaders in Nigeria, including Bishop Oyedepo, Sheikh Gumi and a few others.

The aspiring President owns a good number of lucrative investments within and outside Nigeria. Worthy of note among these includes American University of Nigeria (AUN), Intel (a shipping company) and many more.

Globacom boss, Mike Adenuga, who is the second richest man in Nigeria (after Aliko Dangote), is one of the few private jet owners in Nigeria. The wealthy businessman has three private jets. In his fleet include a Challenger (Bombardier) 604, a Falcon 7X and a Bombardier Global Express XRS.

Madam Folorunsho Alakija is the wealthiest woman in Nigeria and one of the richest women in the world. The oil tycoon owns a Bombardier Global Express XRS private jet.

Other notable mentions include: