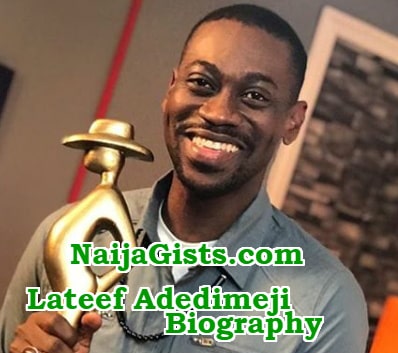 Lateef Adedimeji is a popular face in the Yoruba movie industry. He is a great actor who has been said to share a close resemblance to the king of the Yoruba Cinema Odunlade Adekola. His wonderful acting has endeared him to the hearts of many.

Lateef Adedimeji Biography And Net Worth

This talented actor was born on the 1st of February 1986 at Oshodi area of Lagos state; he is however from Abeokuta in Ogun State. He was brought up at an estate in Isolo where he went to primary and secondary school and then had his University education at Olabisi Onabanjo University Ogun State. He has future plans of furthering his education at a Masters level.

While in secondary school, he reportedly began developing his acting and writing skills after joining a Non Governmental Organization (NGO) known as Community Life Project.

From a young age he has made use of his talent for acting but did not take it up professionally until 2007. Lateef Adedimeji’s first movie was Kudi Klepto. Growing up it was not easy pursuing his dream of acting as he came from a very religious Muslim family and his father did not believe in acting but education. He has a close relationship with his mother who is simply known as Kudirat she is trader. They both share a close bond which has been, right from his childhood days as she was aware and in support of his acting a long time before his father found out. She is a very religious woman who always prays for him and encourages him to do the same. Lateef is an Actor, writer, producer and a talk show host.

He has been featured in countless movies. Below are a few notable ones.

The movie was written and produced by Yewande Adekoya. It is about a lady Kudi (Yewande Adekoya) who suffers from Kleptomania; A condition which causes her to steal uncontrollably. It has a wealth of characters: Odunlade Adekola, Yewande Adekoya, Wale Akorede, Lateef Adedimeji, Toyin Adewale and more. Lateef Adedimeji plays the role of supporting actor in this movie.

Released in 2010 and produced by Lateef Adedimeji, it centers on two families who strongly oppose the relationship between their children (Ada Obi and Mosadoluwa) due to differences in tribe and societal status. It stars the likes of Bukky Ajayi, Afeez Oyetoro (Saka), Yinka Quadri, Fathia Balogun, Lateef Adedimeji.

It features along with Lateef Adedimeji stars like Taiwo Hassan and Ibrahim Chattah. A young man is faced with challenges and misfortune; he later discovers his problems are tied to a secret cult which he is not aware he belongs to. The lead role is played by Lateef Adedimeji.

It is a recent movie which features Bukola Adeeyo, Lateef Adedimeji, Victoria Kolawole. Here, a man who uses questionable means to enrich himself begins to pay the price; as expected Lateef Adedimeji gives an award winning performance.

This is a comedy featuring Actress Regina Chukwu and also Lateef Adedimeji. It focuses on the antics of an American deportee who fools a community into getting him a clinic by claiming to be a qualified American doctor.

It features great stars like Jide Kosoko, Bolanle Ninolowo, Bimbo Oshin, Muyiwa Ademola and Lateef Adedimeji. It centers on the lives of identical twins who are unaware of each other’s existence but strangely suffer from the same mental illness. It was released in 2018 and directed by Muyiwa Ademola.

This is another good movie featuring Antar Laniyan, Lateef Adedimeji, Jaiye Kuti, Iyabo Ojo. It explores the lives of two sisters who were brought up together but later betrayal sets in.

Airat tells the story of a couple in a relationship who come from different religious backgrounds; they have to deal with the opposition from their families. It stars Lateef Adedimeji and Bolanle Abdulsalami who play the lead characters.

A lady is meant to make a choice on the right person to marry this proves difficult due to the number of suitors. Alongside Lateef Adedimeji it also features stars like Adeniyi Johnson, Saidi Balogun, and Toyin Afolayan.

It is a love story about a couple Oladipo (Lateef) and Dola (Omolola Ogbin). A lady whose heart has been broken in the past expects the same from her present relationship. It also features Eniola Ajao and Lekan Olatunji.

In the movie industry, Lateef Adedimeji looks up to actors like Muyiwa Ademola, Adebayo Tijani, Femi Adebayo, Odunlade Adekola, as his mentors.

Born on the 27th of January 1971 in Ogun State, he is an award winning actor, producer and director in the Yoruba movie industry. He had his secondary school education at St. David’s High School Ibadan and is a graduate of University of Ibadan with a B. Ed in Adult Education. His career in acting began in 1991 and by 1995 he had written his first movie script and produced it titled Asise.

He had his big break for his role in the movie Ogo osupa. Some of his other movies also include Iranse Aje, Owo Okuta, Fimi Dara Ire, Omo Elemosho, Ori, Oba Adetoyese, Aderonke Akinkanju, and Alarinka. In 2005 the movie Ori produced and directed by him won the award for Best Indigenous Film at Africa Movie Academy Awards (AMAA).

He is a director, producer and occasional actor who produced his first movie in 2002 titled Durosinmi. Adebayo Tijani was born on March 24th 1975. He is arguably the highest paid producer in the Yoruba movie industry. He is one of the few acts who have managed to remain relevant in the industry probably because of his thorough research into his movie projects and vast knowledge about the Yoruba culture and tradition.

He mostly releases a movie each year. Some movies he has produced include: Durosinmi (2002), Kajola (2003), Ti igbin ba Fa (2004), Igbeyin ewuro (2009). He more recently released two movies Oku Aye in collaboration with Femi Philips and directed Ariyibi; they both starred a number of famous actors and actresses.

His is a Nigerian Actor, producer, director politician and lawyer. As is common Knowledge he is also the son of legendary actor Adebayo Salami. He was born on December 31st 1972 and is a native of Kwara state. Femi Adebayo graduated from University of Ilorin with a first degree in Law and a Master’s degree in Theatre Arts and is currently furthering his education at a PhD level, also at the University of Ilorin. He has been married twice and has 3 children from his previous marriage. He got married for a second time in 2016.

He began acting in 1985 and featured in the movie Ogun Ajaye. He has starred in countless movies since then and has received several awards most recent being, the 2018 Africa Magic Viewers Choice Awards (AMVCA) for Best Indigenous Movie Etiko Onigedu.

These are a few people who have mentored remarkable actor Lateef Adedimeji.

The actor is yet to be married; he did reveal that he is in a serious relationship known to a few friends of his. Sometime in 2018, he reportedly posted a photograph of a lady whom he described as his woman crush. Her identity however is not known.

He was at some point rumored to have been dating Bukunmi Oluwasina a talented actress, producer, singer and writer who is from Ekiti state. She graduated from Obafemi Awolowo University. Bukunmi is the writer and producer of popular Yoruba movie Ayomi in which she stars alongside Gabriel Afolayan and Damola Olatunji.

The movie was sponsored by Pepsi and was the first of its kind to be shown at Viva cinemas. She has also produced and starred in several other great movies.

The rumor of Bukunmi Oluwasina dating Lateef Adedimeji was supposedly started due to a picture being circulated which depicted something of the sort was going on. This rumor was debunked by both parties as the picture was revealed to be from a movie set. Both are believed to be in serious relationships with people outside of the movies industry.

The actor has received a few awards and still counting they are:

Lateef Adedimeji is termed as one of the fast rising actors in the Yoruba movie industry. He is a calm and leveled headed individual who is constantly learning and observing to improve his acting skills and himself in general.