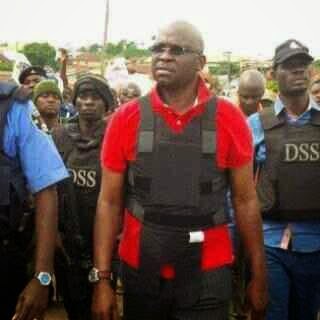 For over four months now in Ekiti state, one person has been notoriously making the headlines on many Nigerian newspapers, that person is no other person than the current governor of Ekiti state, Ayo Fayose.

Fayose who was impeached in 2006 controversially turns the clocks and was able to secure the ticket of Peoples Damaging party (PDP) In Ekiti.

It is most unfortunate to hear that last weak some lawmakers sat in the state assembly under the command of Fayose to impeach a legitimate Speaker and at the same time approve commissioners for Fayose.

That was not the first thug act-like actions of Fayose. It will be recalled that he has before that went to a court to disrupt the seating of the court, and according to some reports, beat the judge of the court.

It is unfortunate that security agencies in Nigeria have already entered a coalition with PDP and impunity.

Why didn’t the police and other security agencies like DSS and security defense bring him to justice before he was sworn in as Ekiti State governor?

PDP governors are out laws and have no respect for the Constitution and people of Nigeria. Just recently, the governor of Katsina state was caught on camera urging his supporters to kill political opponents.

He later came back trying to defend his cruel statement.

In fact even governors from other party are into that irresponsible acts. The governor of Sokoto state was reported to have slapped a staff of a power company. This show that Nigeria is in trouble as there is no rule of law and justice.

Fayose must come to terms with peace and humanity. He must learn to live with political opponents in peace and harmony.