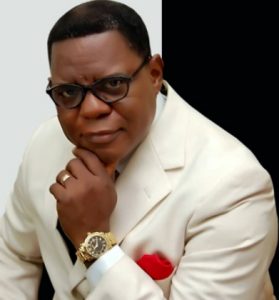 Apostle Alexander Oyewole Bamgbola was born on February 2, 1946 into The Bamgbola Royal Family of Igbo-Owu in Ifelodun Local Government of Kwara State in Nigeria. His humble parents gave him an early education, and had his primary, modern and secondary education in the then Western Region of Nigeria in the early fifties and sixties. After his secondary education, he began a banking career at the then Barclays Bank DCO in Lagos Nigeria.

Determined to have a higher level of education, he worked in the same bank as a young man for five years, studying Banking through The Institute of Bankers, London. He then proceeded to the United States of America to ‘obtain his college education. In 1975, he set an academic record at his Alma Mater, the prestigious University of Illinois in Chicago, USA, by obtaining two degrees concurrently in Finance and Marketing with highest honours and distinction. He obtained a BSc, with honours and distinction in Finance and another BSc with honours and distinction in Marketing. He proceeded to the Graduate School of Business at De Paul University in Chicago to obtain his Master of Business Administration (MBA), Finance and International Business in 1976. For his other academic achievements, he later attended University of Manchester to obtain a Diploma in International Banking. He also obtained a Diploma in Banking from The American Banking Association. He was for several years, a member of The Institute of Bankers, United Kingdom and American Banking Association, USA.

He returned to his banking career at The First National Bank of Boston in February, 1977 and rose rapidly from Management Training to becoming an International Officer in 1979, Assistant Vice President and Vice President by 1982. He pioneered the formation of The First National Bank of Boston affiliate, Nigerian-American Merchant Bank Limited, in Nigeria as a seconded expatriate staff in October, 1979. In 1990, he formed the Victory Merchant Bank Limited in Nigeria and became the Pioneer Chief Executive and Managing Director.

He remained so for three and a half years, when he decided to retire voluntarily and meritoriously. One main reason why he decided to retire which he told his very close friends, was that there was no longer any integrity and honour in Nigerian Banking, and that it had become a shame for him to be introduced as the Chief Executive of a Nigerian bank.

For his total of about fifteen years at the highest level of Bank management in Nigeria, America and the-United Kingdom, he was known as an absolutely incorruptible banker and financial expert. All through his banking career in Nigeria, he refused to accept any form of gifts from any customer, which was andis of course, a normal practice. In 1982/83, when Nigeria sank into her worst international financial crisis, Apostle Alexander Bamgbola put his glorious International banking career on the line to obtain a $60 million credit for Nigeria, from The Bank of Boston, when all international banks doing business in or with Nigeria had withdrawn. While he could have made millions of Dollars and Naira for himself, he purposely decided not to benefit himself in any way or manner. He humbly turned down offers of gifts, including houses in the USA and United Kingdom, expensive cars and substantial cash, as gratifications.

All through his senior level banking career in Nigeria, he sat on The Banker’s Committee of the Central Bank of Nigeria and was often appointed to serve on several strategic sub-committees by the successive Central Bank Governor of Nigeria. He was asked a number of times to serve as the Chief Executive of government-owned or affiliated banks, but humbly turned it down because of the politics and the then well-known prevailing corruption in those banks.

Following his retirement in December 1993, Apostle Bamgbola went into private business. He became a Chairman and/or Board member of some highly reputable companies in and outside Nigeria. In 1994, Apostle Bamgbola quietly turned down an appointment to be a Federal Minister by the then Federal Government of Nigeria in order not to compromise his faith, honour and integrity. This was and is abnormal in Nigeria, but he truly turned it down. Rather, he chose to pursue his life passion which was and is the high calling of God. He was formerly ordained a Minister of God in1991 and 1993 in his then local Church, Bethel Ministries Inc., under late Rev. Dr. Gabriel Oduyemi.

Following the serious crisis in the Nigerian banking system between 1992 and 1995 that crystallized the failure of many new generation banks, dozens of the Chief Executive and top management staff of the banks which had financial problems, were jailed by the then military government. It is on record that Apostle Bamgbola was the only ex-CEO of any of such banks, who was never locked up in jail for one day. He and his bank, Victory Merchant Bank were investigated and were formally cleared by the Nigerian government of any wrongdoing or mismanagement.

In 1998, Apostle Alexander Bamgbola received a Word from The Lord, that he had been called and sent by God as His “Apostle of righteousness to Nigeria and the nations of the world”. He kept this to himself and his wife. On March 1, 1999, he received a divine and formal Apostolic calling from The Lord in a clear dream. This gave birth to ZION THE CITY OFTHE LORD MINISTRIES, INC. on May 2, 1999. Since then, he has been God’s Overseer of the ministry world-wide. He is also the President of Zion the City of The Lord Ministries Incorporated, USA. Apostle Alexander Bamgbola’s Apostolic Ministry has taken him to several nations of the world to minister. He has been, since 2004, the President of World Apostolic Revival Movement (WAR). He is the President of God’s Covenant-Wealth Trustees.

He is the International Vice Chairman of GLOVIM Association of Ministers Inc, USA, headquartered in Atlanta, USA. He is the Chairman of the Nigerian Board of Trustees of The Fellowship Covenant Ministries International, Inc. (FCMI), headquartered in Sacramento, USA. He serves on the Board of Trustees of several ministries and NGOs around the world. Apostle Alexander Bamgbola is a Life-member of the Full Gospel Business Men’s Fellowship International, where he had served as both a Chapter President and a Field Representative in the nineties, before moving into his Apostolic calling.

In January/February 2003, he was invited on scholarship to attend the renowned Haggai institute in Maui, Hawaii, USA, where he was awarded a Diploma in Christian Leadership. During the course of the training, he received a divine mandate from The Lord to begin an international youth evangelical movement beginning with Africa tagged, “African Youths for Christ Movement”. Upon his return to Nigeria, he began to put the machinery together by getting in touch with church leaders and raising a foundational team. However, The Lord ministered to him that the time has not come. Not until 2013 that The Lord began to minister to him that the manifestation of the vision should begin. Preliminary work commenced since then in preparation for the launching the vision which The Lord had now enlarged to go beyond Africa and cover the earth as “Global Youth for Christ’s Movement”.

Besides his personal ministry, Apostle Alexander Bamgbola served for five glorious years, as the Chairman of The Pentecostal Fellowship of Nigeria, Lagos State, from February, 2009 to June 2014, when he voluntarily stepped down and handed over to a great leader and team, which he prayerfully raised in the course of his five years tenure. In December, 2014, he was elected into tenure of three years, as Chairman of Christian Association of Nigeria, Lagos State, to the glory of God.

Apostle Bamgbola is a recipient of many awards nationally and internationally, including Honorary Citizen and Ambassador of the State of Georgia, United States of America. He has previously been awarded Doctorate in Ministries and on December 8, 2015, he was awarded honorary Professor of Leadership, by the University of Leadership and Sound Doctrine, USA.

Until November 8, 2015, Apostle Alexander Bamgbola was successfully married to his beloved wife, Rev. Dr. (Mrs.) Grace Obiageli Bamgbola of blessed memory for almost forty years. They are blessed with four children and five grandchildren to date. He is a Spiritual father and mentor to innumerable men and women of God across the nations of the world, to the glory of God. Above all things, Apostle Alexander Bamgbola only wants to be known as a Wretched Soul Saved by Grace (W.S.S.G.), heading for no other place but Heaven by the special grace of God. Amen.