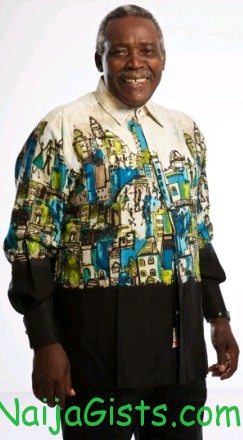 Olu Jacobs is one of the veterans of Nollywood, he is an International super star that has worked with International actors like Jean Claude Van Damme and has also become the favourite for elderly roles in Nigerian movies. Olu Jacobs biography shows that the veteran actor was born on the 11th of July, 1942 in Abeokuta, Ogun State, South West Nigeria.

Olu Jacobs age record shows that the highly revered actor is 70 years old. Olu Jacobs had starred in several British Television series aside featuring in many local and International movies.

Olu Jacobs lived most of his youthful life in the United Kingdom before moving to Nigeria , he was trained at the Royal Academy of Dramatic Arts in London, and in the 1970s, he starred in several British television drama series which include; Till Death do Us part, The Goodies, The Professionals, Barlow at Large, and The venturers. Some of international Olu Jacobs movies in the 1980s include; the secret of the lost legend, the dogs of war by John Irvin, and the pirates by Roman Polaski. Olu Jacobs has starred in over 100 Nollywood movies.

Olu Jacob is a man of many movie roles, while he was younger; he played the role of a commissioner in in the 1979 movie-Ashanti, a custom officer in the 1980 movie- dogs of war, and Boomako { a slave} in Pirates { 1986}. Olu Jacobs charisma and manner of delivery in Nollywood movies cannot be rivaled by any other actor, his baritone voice also add some uniqueness to his mastery of the profession. Olu Jacobs in his 37 years in Nollywood can best be described as a bridge between the young and the old.

Like many other young aspiring individuals of his age, Olu Jacobs and family issues nearly frustrated him out of pursuing his career as an actor, his father was against his decision to study Dramatic arts, and in 1964, he left the shores of Nigeria to pursue his dream in the United Kingdom. When Olu Jacobs came back to Nigeria in the early 1980s there were no home movies and artist fees were very low, he however formed a company where stage plays were the major entertainment drive before the advent of home movies. Olu Jacob’s first major role was the production of a television series titles “Vigilante” that starred RMD and Mama D.

Olu Jacobs wife- Joke silva
The name of Olu Jacobs wife is Joke Silva, another prolific Nollywood actress who is regarded as the role model to younger actresses in the movie industry. Olu Jacob met his wife at the casting of Wole Soyinka’s Jero’s metamorphosis at the National Theater Lagos during the 21st anniversary of Nigeria’s independence. Olu Jacobs children rarely appear in the public, they are two young boys.

According to latest Olu Jacobs news, the prolific actor who just marked his 70th birthday has confirmed that he will remain part of Nollywood for years to come and there is no sign of retiring yet.