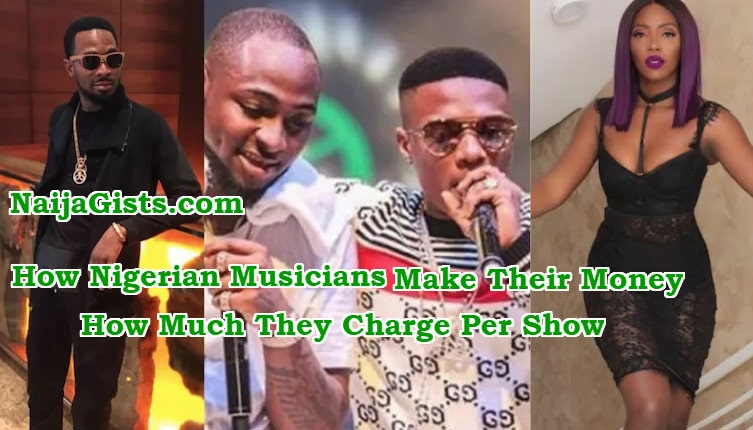 Gone are the humbling days of the Nigerian music industry. Today, the Nigerian music industry has grown significantly in prominence and wealth. The individual male and female artistes are now accorded due respect, globally; which, of course, comes with its accolades. In this article, we are going to be looking at the various ways Nigerian contemporary music artistes make their money.

It is no longer news that, many Nigerian musicians are today very wealthy individuals. In fact, a good number of them are billionaires. On average, many of these artistes make tens of millions of Naira per year. Stay with us, as we reveal to you the various money-making channels of these wealthy personalities.

How Nigerian Musicians Make Money Through Their Music

An average Nigerian musician today, has at least three channels of making money from his or her music. Overall, these channels could number up to ten (10). Some of the common ways these artistes make their money have been outlined below.

Most Nigerian musicians made it out of the streets, with nothing to offer except their music talents. Hence, most of them rode on the back of certain record labels to make their stand in the Nigerian music scene.

The game is simple; a recording label signs an artiste (often for a sizeable sum) and then places him on a specified payment agreement. This could be monthly salaries and/or percentage on ROIs (returns on investments). While, most of these contracts are nothing to write home about, it is obviously the fastest channel of making money for new, upcoming artistes.

About two decades ago, Nigerian musicians rely solely on the sales of albums, in CDs. More often than not, these albums are sold out to marketers (for a significant sum), who then resale the albums in the open market at higher profit margins. Today, most artistes handle the sales of their albums themselves.

Furthermore, Nigerian contemporary artistes now sell their albums via various internet platforms. Notable internet channels in this regard include iTunes (by Apple), Amazon music and SoundCloud among others.

Today, most Nigerian music artistes now make sizeable sum from their respective YouTube channels. On average, YouTube pays $2 for every one-thousand views on the platform. This figure may look very small but when accumulated, it often runs into hundreds of thousands of dollars.

Wizkid’s most recent video, titled Fever, currently has about 7 million views on YouTube. Johnny (by Yemi Alade), which is the highest ranked Nigerian music video, has a total views of about 100 million.

Other notable artistes who made the list of Nigerian artistes with most viewed videos on YouTube include D’Banj (Oliver Twist with about 40 million views) P’Square (Personally – about 50 million views) and so on.

This is arguably one of the most lucrative money-making channels in the music industry today. Virtually all Nigerian music artistes today have one sponsorship deal or another.

Other top multinationals have also endorsed many Nigerian musicians. Banky W was the first Nigerian artiste to be signed by Etisalat (now 9mobile), in a deal worth about 150 million Naira. Also, 2face Idibia was also signed by Airtel Nigeria and he is currently an ambassador for Coca Cola (alongside his wife, Annie)

Currently, the likes of Olamide and Davido have endorsement deals with Hennessey and Infinix Nigeria respectively. Also, the likes of Tiwa Savage. DJ Cuppy, Wizkid and a few others are currently under contract with Pepsi.

In essence, every top Nigerian musician has at least one sponsorship deal. On average, these deals are worth in the range of 10 million Naira to 200 million Naira.

Below is a summary of the endorsement deals (past & present) of selected top Nigerian artistes.

These are payments made to musicians for airing their songs on live Radio, TV channels and on-stage performance. For some artistes, this is a very lucrative avenue. For others, it is not.

Prominent radio channels like Beat FM and Cable channels like SoundCity, HipTV and so on are the major contributors in this regard.

Today, there is technically no movie without soundtracks. More often than not, most of these tracks are coined off popular songs. The owners of these songs are paid, before their songs can be featured in any movie. This fee is known as Licensing fee.

The most prominent Nigerian musician in this regard is popular gospel singer, Tope Alabi, who has recorded close to 400 soundtracks for Yoruba movies, between 1999 and 2018.

It should, however, be noted that, Licensing fees are not limited to only movies. The fee is also paid on adverts, TV Shows and other events where an artiste’s song is featured.

Today, many top Nigerian music artistes double as CEOs of their respective record labels, with a host of music artistes under them. Record label owners receive an agreed percentage (usually higher) on the earnings of their wards.

Most Nigerian musicians (if not all) have one side hustle or another. In fact, a good number of them are now successful businessmen and women, with interests in business fields, ranging from Oil & Gas to hospitality.

Davido’s billionaire’s father, Adeleke Adedeji, is an Oil & Gas tycoon and the singer has a stake in his father’s company. Also, Peter and Paul Okoye have ventured into numerous business lines in the past, which include an hospitality company (hotel), Oil and Gas among others.

The most famous entrepreneur in the Nigerian music scene is no other person than D’Banj, whose real name is Oladapo Oyebanjo. He has interest in Agriculture (Koko Garri) and Media (Koko Reality TV Show).

These shows often range from live concerts to political rallies or other social events. This is, without doubt, the main money-making medium for Nigerian music artistes.

How Much Nigerian Musicians Charge Per Show Or Concert

Below is a comprehensive outline of how much some selected Nigerian artistes earn per show, within Nigeria and beyond.