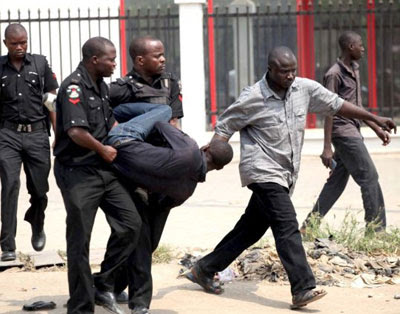 15 people were arrested during a raid by the police in an uncompleted building opposite the Corporate Affairs Commission (CAC) Headquarters, Abuja.

A witness told the News Agency of Nigeria (NAN) on Thursday that about 50 armed policemen stormed the building which serves as business centre for the CAC customers in the early hours of Wednesday in search of hoodlums.

They were said to have arrived in about four vehicles and started arresting those who could not identify themselves.

It was gathered that the action caused pandemonium around the commission as people ran helter-skelter to escape possible arrest in error and not certain what the mission of the police officers was.

The officers were said to have come in a commando style, stationing themselves in strategic locations at the entrances and exits of the streets leading to the building.

Mr. Soji Olawuni, a lawyer, who registers businesses with CAC on behalf of applicants, said that the police had invaded the place earlier but no arrest was made.

A staff of the commission, who spoke on condition of anonymity, said that some criminals use the building as a hideout to perpetrate crime.

The official said that some “fake lawyers” carried out illegal businesses in the uncompleted building and defraud unsuspecting customers.

One of the hawkers in the vicinity, who identified herself as Mary also corroborated the claim of the CAC staff, stressing that some of the people arrested slept in the building.

A food vendor, Mrs. Afeez, said that the police came and picked some boys who constituted themselves into nuisances in the area.

When contacted, the FCT Police Public Relations Officer, DSP Altine Daniel said that she was not aware of the raid.

NAN, however, learnt that the Metro Area Command of the Police carried out the raid and made the arrests.

When NAN visited the command at Maitama, the Assistant Commissioner of Police, Mr. Sunday Odukoya, who is in charge of the command, was said to have gone out on official assignment.

A senior police officer at the command, who pleaded anonymity, confirmed the story, saying that it was part of crime preventing measures in the territory.

The officer said that the raid followed a tip-off that some fraudsters gathered in the building to perpetuate criminal activities.

“Raiding of suspected black spots is one of the crime prevention measures,” he said, adding that raids on such spots in the FCT would be carried out regularly.