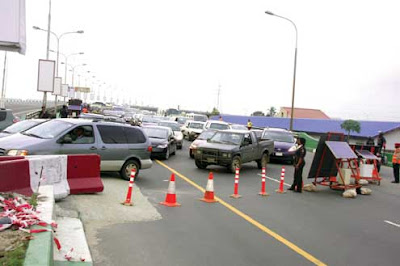 The situation on Third Mainland Bridge today was a bumper to bumper. The traffic chaos witnessed today by motorists and commuters was caused by the ongoing repairs of eight expansion joints on the bridge.

Movement from the Lagos Mainland to the Island was diverted at Iyana Oworonsoki to the Anthony interchange into Ikorodu Road and onward to Eko Bridge.

The situation was the same this morning on Ikorodu Road where motorists also experienced traffic jam. The traffic snarl delayed workers on the Island as they could not get to their offices on time.

The situation led to high increase in transport fare as commuter bus drivers capitalised on it.

Commuters on the route are faced with lots of inconveniences as they claim the repair work on the bridge was coming rather too late.

The repair of the bridge, which started on Sunday, left many workers in areas like Egbeda, Ayobo, Iyana Ipaja and its environs stranded.

Many commuters who could not wait endlessly at the bus stop resorted to taking okada to their various destinations.

According to a commuter, Idris Oseni who said he was going for an appointment on Lagos Island, the situation is worrisome, adding: “Our leaders are fond of not doing the right thing at the right time; which led us to the situation we found ourselves now.”

Another commuter, Chukwuka Uju, a trader on Lagos Island, said the increase in transport fares will adversely affect her business.

She urged the state and federal governments to ensure that the repair is enduring.

Lukmon Ajidagba said that the repair will cause a lot of traffic chaos, adding that the excesses of commuter vehicle drivers shuttling between the Island and Mainland are the big problem for other motorists.

“I think it is for the government to liaise with the leadership of the National Union of Road Transport Workers, NURTW, and taxi drivers to caution them against exploiting commuters unnecessarily.”

Meanwhile, at least, 500 officers of the Federal Road Safety Corps, FRSC, have been drafted to assist in the management of traffic during the five months the repair work on the third would last.

The News Agency of Nigeria (NAN) reports that the officers would be complementing the efforts of 700 men of the Lagos State Traffic Management Authority (LASTMA).

Mr. Nseobong Akpabio, Lagos Sector Commander of the FRSC told NAN in a telephone interview that the officers and men were on ground for effective traffic management.

Akpabio said that he had appointed an assistant corps commander as coordinator of traffic management throughout the duration of the repairs.

“The Lagos State Sector Commander has named one Assistant Corps Commander as the coordinator of traffic management exercise to supervise FRSC operations throughout the period of the repair work on the Third Mainland Bridge,” Akpabio said. He said that the men would be at the diversion, repair site and alternative roads to ensure smooth traffic operations. Akpabio reassured Lagos residents maximum security and urged people to bear with the situation.

NAN recalls that the Lagos State Commissioner for Transportation, Mr. Kayode Opeifa, had on July 6, ordered the deployment of 700 LASTMA men to manage the traffic situation. Opeifa urged motorists to assist in ameliorating the situation by obeying traffic managers as well as traffic rules and regulations during the repair work.

He said that there was need for motorists to always listen to traffic radio for effective communication on traffic situation in the state.