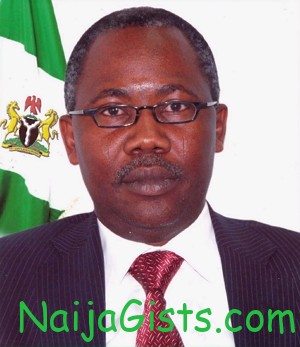 The Attorney General of the Federation (AGF) and Minister of Justice, Mr Mohammed Adoke (SAN) has affirmed that the incessant killings of Nigerians by the Islamist extremist -Boko Haram might be a continuous reaction to the killing of its kingpin, Mohammad Yusuf.

According to Adoke, the attack: “is a probable reaction to the extra-judicial execution of the leader of the sect, Mohammad Yusuf, while in Police custody in 2009.”

He said this at the national dialogue on “Torture, Extrajudicial Killings And National Security: Human Rights Implications.” organised by the National Human Rights Commission, (NHRC).

Adoke lamented that the careless use of arms by security agents had led to 7,198 extrajudicial deaths in four years across the nation, noting that “more recently, the chairman of the NHRC opined that this approximated to the summary execution of well over 2, 500 detainees.”

Hear him: “Although these figures have been stoutly disputed by the police, even the most charitable defenders of the Force cannot deny that some dishonourable officers indeed have taken the law into their hands in the most barbaric fashion by killing suspects and innocent citizens.

“For the avoidance of doubt, the constitutional derogation to the right to life which sanctions the use of force to curb an escapee is no blank cheque to carry out extra-judicial killings. The provision can only be invoked where death arises as a result of the use, to such extent and in such circumstances as are permitted by law, of such force as is reasonably necessary to effect a lawful arrest or to prevent the escape of a person lawfully detained.

“Several factors have been advanced to rationalize the rising wave of police brutality and extrajudicial killings. Such reasons include the conditions of service of the Police, especially the poor salary, living condition in the barracks and low self-esteem. All of these combine, it is often argued, to make the Policeman an angry man with arms thus putting him on edge and frequently on the lookout for illicit and corrupt enrichment.

Speaking further, the ace legal practitioner affirmed: “Nonetheless, government cannot afford to ignore this dangerous trend by which lives of innocent citizens are endangered or snuffed out by those whose constitutional duty it is to secure the lives and property of the citizenry. Most of these challenges appear to have been significantly tackled by the recommendations of the Presidential Committee on the Re-organization of the Nigeria Police which recently submitted its report.

“It is instructive that among other recommendations, the report highlighted the need to embark on a continuous weeding out of bad and unscrupulous elements who on account of arbitrariness and opaqueness in recruitment exercise had found their way into the force.

“Terrorist attacks such as the October 1, 2010 Independence anniversary bomb explosion by the Movement for the Emancipation of the Niger Delta, MEND, where 12 people were reportedly killed and the spate of suicide killings by the Boko Haram group are direct attacks on the core values of democratic governance, namely the rule of law, the protection and dignity of human beings; mutual respect between people of different faiths and cultures; and peaceful resolution of conflict.

“However, in the fight against terrorism, we cannot compromise on these core values. In other words, we should not perpetuate a cycle of violence and brutality in the quest to stamp out the evil of terrorism and extremism.

“As I see it, terrorism is in itself a direct attack on human rights and the rule of law. If we sacrifice them in our response, we are handing a victory to the terrorists. I, therefore, believe that the following issues are germane to a democratic response to the threat of terrorism, namely the protection of individuals and communities; the stabilization of existing conflicts and discontents; the countering of harmful and extremist ideologies; the deployment of adequate response to the economic and social insecurities that contribute to the growth of terrorism.”

He recalled that Nigerians were enraged by the gruesome killings of four students of University of Port Harcourt on October 5, by a mob of vigilante and locals at Aluu community in Rivers State.
He disclosed that such incident “is also symptomatic of the weakness of the country’s security and justice systems.”

He said:“There is no doubt that the rule of law has taken flight in a society which condones a situation where citizens take the law into their hands and summarily try and execute suspected felons. The apparent slow pace of the criminal justice system particularly the corruption that permeates the system has been identified as the main reason why citizens take laws into their hands,” he noted.