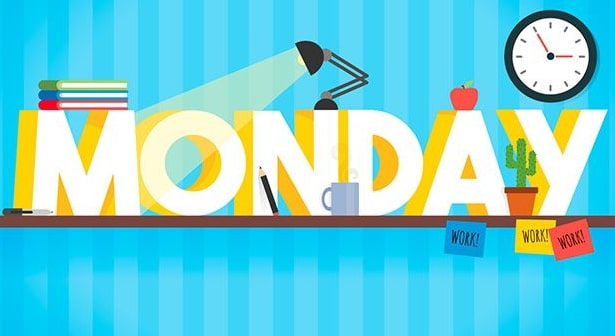 Monday is everyone’s least favorite day. It marks the start of a productive week and deprives us of the weekend fun. Most people claim to hate the day called Monday.

While it can be so discomforting, there great things about Monday. Being happy and grateful while doing things that interest you will keep you going till the day is over.

Nothing beats the joy we get when we are able to beat the Monday blues. It isn’t so bad after all. Let’s discover all the good and bad things associated with Monday.

It is common to man, black or white, about the pains of this dreadful day. Here are facts about Monday morning.

Most Employees Are Late To Work

When the alarm rings, every worker tends to feel very uncomfortable knowing that it is Monday. Most people look rather gloomy on this day.

They don’t feel motivated enough due to the transition from the weekend period to the start of a work week. Everyone wishes the weekend isn’t over yet.

People grumble and whine a lot

Monday blues are real. People tend to act more sluggish on this day. Complaints and constant whining go together with Monday.

People secretly crave more “weekend time” so they can lazy around for as long as they want. But, as we all know, the weekend is never enough.

Due to the emotional sensitivity of most people on Monday, employers notice lessened productivity. This is because everyone gets stuck up in their heads while having a hard time adjusting to the new week.

It is overall estimated that less than four hours on Monday produce good results. The rest could be full of mistakes and low productive rate.

Monday is prone to more suicides. It is recorded that the day has a large number of deaths compared to the weekend. There is also a probability that depression levels get peaked on Monday.

As a result, we have lots of grim and gloom all around in the atmosphere. People do not smile early enough on Monday. Laughters, grins and smiles aren’t noticed until close to midday.

On Monday, we don’t get to see a lot of rain. It’s arguably the least most rainy day of the week. Mondays tend to get hot and really sunny.

At times, these atmospheric conditions helps to add more sadness. We can allocate the cause of less rain to the activities and pollution done on land during the weekend.

This is one of the few positive things about Monday. Most people buy so much over the weekend so the stores don’t really get much sales on Monday.

If you want to get a good deal while negotiating for a product, do that on a Monday. The salespeople will be ever willing to oblige since they get few customers on this particular day.

Workers experience more high blood pressure on Monday. This is as a result of workload and the stress caused by the anxiety which grips everyone.

Students also get anxious and more worried on Monday morning. Probably, they aren’t done with their assignments or they dread the lessons which are on row for Monday.

What is Cyber Monday?

Cyber Monday is a term created by online retailers to help boost their sales. It is a day that encourages a lot of digital shopping. The day is mostly on the Monday which is immediately after the Thanksgiving Holliday. This mostly celebrated each year in the United States.

How was it created?

Cyber Monday was created by Ellen Davis and Scott Silverman. But it got its debut in 2005. Cyber Monday was developed as retailers and salespeople noticed the increase in online sales for few days after the Thanksgiving celebration.

This made stores to officially make it a day for consumers to get products at a cheaper and more benefitting cost. Although most people thought it wouldn’t catch on, it is now one of the biggest online shopping day in the year.

What happens on this day?

Just like the widely acclaimed “Black Friday” which is known worldwide, Cyber Monday is a day to buy just about anything. The best part is you can get any product at a reduced price.

Consumers can also promote the stores of their favorite retailers on social media. Also there will be a ton of product reviews on this day. Cyber Monday has its own designated hashtag for the day. These are #CyberMonday, #DealsDealsDeals and #CyberDeals.

Is any charity done on Cyber Monday?

Cyber Monday is an Internet shopping day in which hundreds of products are bought every minute or less. It is imperative to think about giving away stuff to orphanages and the less privileged.

You may have come across the term “Meatless Monday” and you are wondering what it is about. Meatless Monday is an international campaign which is observed by a lot of countries in a bid to spread awareness about the hazards of meat to the body and to the planet. It is encouraged to not eat meat on Mondays just so we can reduce our meat consumption.

Why is meat hazardous to the body?

A lot of people consume meat but they aren’t aware of the dangers it poses to their health. Processed meat and red meat are major causes of diseases. Eating these makes one more prone to obesity, cancer and heart diseases.

It is better to switch to a much healthier diet which consists of fruits, vegetables, plant-based protein and whole grains. This will help reduce the mortality rates in the world.

Why is meat bad for our planet Earth?

All of these greenhouse gas emissions are very hazardous to the health of planet Earth. These gases are far more potent than the exhaust fumes which are gotten from vehicles. This is more reason why we should reduce meat.

How does meat limit our resources?

In addition, animals in factory farms generate about 500 million tons of manure yearly. This amount of animal waste ends up polluting streams, rivers, groundwater and even the ocean. The awareness of the bad effects of meat should be spread all over.

Why was Monday chosen to be the meatless day?

The tough day is full of struggle for most people. There will be so many things to do and be occupied with. This leads to most of us settling for any meal we can get. But in order to maintain a good health to keep you through the week, the food consumed on Monday must be healthy.

Monday was therefore chosen as the day in the everyone on Earth should go meatless. This would go a long way in reducing the demand for meat since the industries are trying so hard to keep up. Eventually, meat productions would be lessened and gas emissions would be drastically reduced.

It is a weekly television series that aired on the American Broadcasting Company(ABC) from 1970 to 2005. It got on the ESPN network in 2006 and is there till date.

Monday Night Football is one of the highest rated and longest-running programs ever on commercial networks. People outside the U.S. can also watch the program on cable and satellite TV. Canadians can see it on TSN and RDS.

Australians can watch on ESPN Australia. Portuguese can view on SportTV 3 and SportTV HD. People in Denmark can watch on TV 2 Sport while some other parts of the world can get it on ESPN International.

For other major languages like Spanish and Portuguese, other versions are available. ESPN Deportes is an American channel that broadcasts in Spanish language. The Portuguese version airs on ESPN Brasil which is a Brazilian cable network.