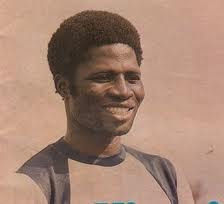 We learnt the Shooting Stars football star who reigned in the 70s and 80s died of lung cancer in Ibadan, Oyo state Nigeria this morning.

Ojebode was part of the Shooting Stars Football Club team that won, for the first time for Nigeria, the prestigeous African Cup Winners Cup in 1976.
It was Nigeria’s first continental trophy.

Mr Ojebode has been bedridden for sometimes before his sudden demise.