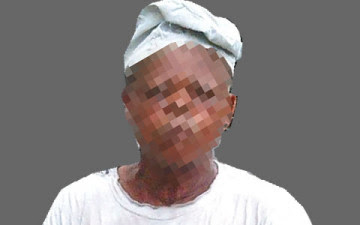 Chidinma and further did same to his one-year-old granddaughter, Treaga. Ehijere’s wife, Margaret said she had had a running battle with her husband over his immoral and shameful behaviour of defiling their children. She has six children for the suspect and the suspect defiled their two girls. The Lagos State Police Public Relations Officer, Ngozi Braide paraded the suspect before newsmen in her office at Oduduwa Street, Ikeja yesterday.

His wife, Margaret alleged that many of their neighbours on Kolawale Street, Ejigbo, where they reside already knew what the suspect had been doing to the children. She said when her first daughter, Favour was 17, her father allegedly defiled her before she got married and delivered the one-year-old baby, who the suspect allegedly defiled recently. The woman alleged that she travelled to Abuja for her catering business when her daughter called her on phone, informing her how the father defiled her and she was rushed to a hospital.

She had to quickly return to Lagos to settle the problem. She said after that, the suspect defiled her seven-year-old daughter identified as Chidinma. As if that was not enough, the man allegedly undressed his granddaughter, Treaga who is a year and three months old. She said he removed Treaga’s diaper and clothe and had carnal knowledge of her. She said the baby was crying and people were wondering what was going on in their apartment. She said as she returned to the apartment, her husband came out sweating.

As she tried to observe what was wrong with the child, she noticed that blood was dripping from her private part. The baby was rushed to the hospital and doctors confirmed that she was defiled. The doctor’s report stipulated that the baby’s hymen was absent. The doctor noted that the baby sustained injury in her private part as a result of the defilement. The woman said she had to report her husband to the police because his atrocities were becoming unbearable.

The woman said it was when she was asking her husband why he descended so low as to defile her granddaughter, Treaga that their seven-year-old daughter, Chidinma narrated how their daddy usually defile her (Chidinma), each time mummy was not in the house. Chidinma said her daddy would promise to buy her fine shoe, clothes and money. She would complain that he usually promised but hardly fulfill it.

She alleged that her daddy would undress her and had carnal knowledge of her. Doctor’s report also stipulated that Chidinma’s hymen was also absent.

The suspect, who hails from Edo State debunked the claim, saying he did not have carnal knowledge of any of her children. He said it was his wife, who instigated the children to tell lies against him. His younger brother, Christopher wept that the story would damage the reputation of their family.