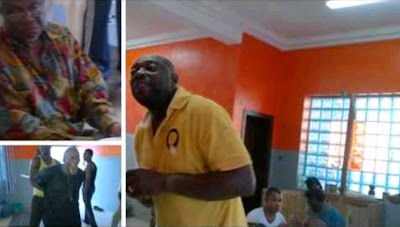 As the world prepares for this year’s London Olympic Games, some of Nigeria’s popular actors have arrived at the United Kingdom as part of efforts to add spice and glamour to the opening ceremonies of the sports competition.

Nigerian actors such as Olu Jacobs, Joke Silva, Justus Esiri, Bimbo Akintola, Ekpeyong Bassey and Segun Arinze to mention a few will be presenting three stage dramas namely; The King Must Dance Naked, The Lion and The Jewel, and Naming Ceremony respectively.

The thespians, NollywoodReel gathered, had undergone rigorous rehearsals in Lagos, Nigeria for several weeks before their departure to the United Kingdom over the weekend. The three plays they will be presenting are produced by Olu Jacobs and Joke Silva for LUFODO Productions.

While The King Must Dance Naked is directed by Bayo Oduneye, The Lion and The Jewel and Naming Ceremony are directed by Niji Akanni and Ifeoma Shomolu respectively.

Speaking with NollywoodReel shortly before leaving the shores of Nigeria, Segun Arinze said aside adding spice and glamour to the Olympics ceremonies, the purpose of the play presentations is to further help Nollywood maintain its relevance and further place it on the international map.