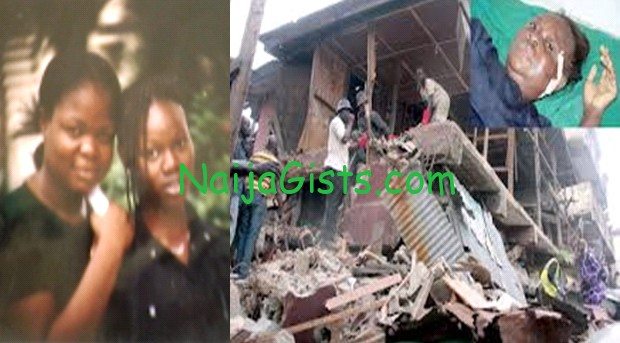 The 2 graduate sisters identified as Toyin and Bukola reportedly died in the collapse of Block M20 of the building which cause is still unknown.

Their mother, Mrs Coker, a widow was rescued however, she is currently in critical condition at the hospital.

Affected were flats 2, 4 and 6 of the six flat low-cost houses built
over 30 years ago.

The building, Block M20, according to eye witnesses started showing
cracks and sinking over a year ago. The tragic incident as gathered,
occurred at about midnight causing a deafening sound.

It was learnt that occupants of the collapsed building apparently
ignored the warning signs of imminent danger which was evident since the
past year. Tenants in flats two and six reportedly moved out some
months ago, only for owner of flat two to lease the flat out to new
occupants.

After the incident, youths in the area reportedly began a rescue mission. The body of Mrs Coker in her unconscious state was said to be the first to be brought out from the debris at about 3am and was immediately rushed to the estate health centre. (Vanguardngr)