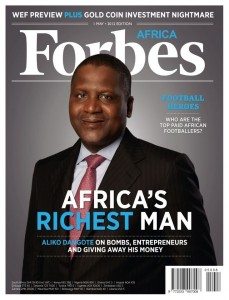 He has been named by Forbes magazine as the richest man in Africa.

He is the owner of Dangote group of companies.

He’s got no formal education. His father left him in the business since his early childhood

He has worked hard and has put a lot of Nigerian youths back to work.

He export produce to major countries in Africa and has been featured in Forbes Magazine.

It takes vision to go this far.