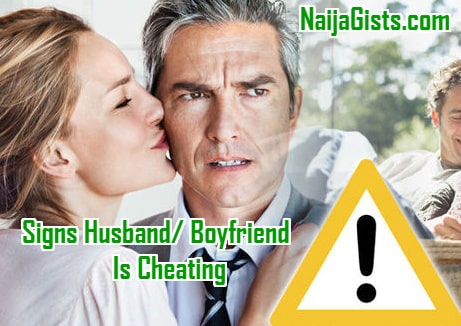 ‘Unfaithful Husband, Boyfriend Signs: Signs Of A Cheating Partner In Marriage Or Relationship

Signs Of A Cheating Husband Or Boyfriend: 7 Classic Warning Signs Of Adultery, Extramarital Affairs To Watch Out For

Getting to know that your lover; someone you trusted with your heart and vagina is cheating on you can be devastating as hell. I know this because I have been there. My boyfriend and I have been together for two years before I got to find out that he was playing games behind my back. The first thing I noticed about him was that unlike before, he became very much attached to his phone. We could be together but all his attention will be focused on his phone. It will be very obvious that he is chatting with someone. And I know it’s a girl because at intervals I would catch him blushing and I am sure he isn’t gay so it was not possible that his fellow guy could have that kind of effect on him; it can only be a girl.

Again, times without number, I confronted him but he will simply wave it off like it doesn’t matter. And when I threaten to start chatting with my online male friends whenever we are together, his reply was always, “Go ahead and do it then. Who is holding you?”

Usually, I will laugh and think it’s actually a joke until one day I finally got hold of his phone and checked his chat history with a lady on his friends list that caught my attention. It wasn’t my intention to play the FBI card on him but I was driven with curiosity. Besides, I was no longer feeling the vibe in the relationship and I thought it best to know the truth so as to know if I will stop wasting my time on a doomed relationship. Well, my suspicion turned out right and it wasn’t easy dealing with it. It literally broke me down but then I am not here to organize a pity party for myself rather I will tell you those signs that you should be on the lookout for so you don’t get to find yourself in my shoes.

So, are you getting this vibe that your partner whether boyfriend or husband is cheating on you? Here are some of the signs that could be evident –

Yes, you read that right. If your boyfriend or husband suddenly starts becoming very much attached to his phone, chances are he found an interesting damsel online. Like you read above, one of the signs I noticed when I felt this vibe that he was cheating on me was that his phone became his new best friend. Most times, he will excuse himself to go answer a call; he changed his password and gets pissed whenever I reach out for his phone.

When your boyfriend or husband starts cheating on you, it will be very obvious that the attention you are used to getting from him will automatically dwindle. No matter how much we try to downplay it, you can’t be interested in two people and give each the same amount of attention. One of them must receive more attention. In that case, if you notice that the attention you usually enjoy has reduced; chances are there is a damsel out there that is messing with his head.

For some guys, the moment they start cheating, the sex life between you both will gradually become non-existence. They wouldn’t touch you like they usually do and when you try to make the move, they will withdraw. While this may be true because the guy is obviously feeling guilty, some guys may not adopt this approach. Rather they will go ahead and introduce lots of new things that you guys never did in the bedroom; sex styles that were never practiced. In that moment, don’t get carried away and think he is probably trying to spicy up the relationship, chances are there is another damsel teaching him all these.

It is normal for your boyfriend or husband to get jealous when you are in the company of your male friends. So, the moment he stops showing that jealousy, there is a huge chance that there is some girl out there who is taking her attention and he doesn’t really give a fuck who you hang out with or the guy that is having a sex chat with you. There is this friend of mine that recently found out that her boyfriend had been cheating on her. Prior to the day she found out, her boyfriend suddenly stopped getting jealous when she hangs out with her male friends. Sometimes when she tells him about the guys that are interested in her, he waves it off and makes statements like, “You can go out with them if you want na”.

Another sign that your husband or boyfriend might be cheating on you is that he gets defensive the moment you mention the fact that they could be cheating on you. You could even say it as a joke and they will reply with all seriousness that makes you wonder if they have suddenly lost their ability to take a joke.

When your boyfriend or husband is cheating on you, you will get to notice how often his mood swings will be. At a point he might be laughing and before you say jack, he is all moody again. This might be because they are not comfortable in themselves so your love and attention is really painful to them.

Also, at a point you will get this vibe that he may be cheating on you and when you ask for reassurance that he is being faithful, you will not feel satisfied with his response.

The last sign you should be on the lookout for is that you should never doubt your intuition. There is always a good chance that your partner is cheating on you if your intuition tells you so.

While the above signs could be true in certain cases, it may not be the case in your situation so don’t go about attacking your partner over what he didn’t do.

Take your time to find out the truth before you question him. Avoid being aggressive when addressing this sensitive issue.