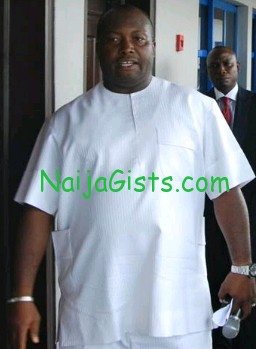 The world of billionaire mogul behind Capital Oil, Ifeanyi Ubah is getting more complicated by the day…and his assets in Nigeria and across the globe are under threat of seizure and sale!

While Asset Management Corporation of Nigeria (AMCON), which sued him over N28 billion indebtedness, is asking the Federal High Court in Abuja to sell his assets, the London court has made a major breakthrough.

Last week, one of the ships under surveillance belonging to the 41 year-old business was located in the Netherlands, and seized. The ship, Mongolia was listed in the order of the London court, which contained wide ranging demands, including the itemization of Ubah’s worldwide assets.

Three ships, belonging to business associates of Ubah (who are defendants in the london case with claim No. 2012 folio 1300- ROFOS NAVIGATION LIMITED, HELI NAVIGATION LIMITED and TUTBURY MARTIME LIMITED) had earlier been seized, while the search for Mongolia intensified across the globe. And Mongolia was seen last week(but the ship”s insignia had been removed, and located by radar and identification details).

The case in london, instituted by Access Bank, which through Coscharis Motors’ Cosmas Maduka had advanced capital oil a loan totalling N21billion for PMS importation last year, was again heard on Monday December 3, 2012.

Reportedly admitting that the said Mongolia was his, Uba was quoted as saying that the product on the ship does not belong to his company. On Monday, December 3, the court was to decide what should happen to the content of the ship.

Meanwhile, in Abuja where justice Abdu Kafarati is presiding over the case (Suit NO. FHC/ABJ/CS/714/2012) between AMCON and Ubah, the next point of determination is either to allow AMCON go ahead and sell the assets of Capital Oil or grant Capital Oil access to its premises so as to continue its business unhindered. This new condition came as a surprise last week when many had thought that the parties were discussing peace and how to ensure that Capital Oil’s operations was restored. The peace meeting reportedly broke down, and both parties are maintaining opposing views.

The trouble of Capital Oil’s Ifeanyi Ubah began on October 9, 2012, when he was a guest of special Fraud Unit, Nigeria Police (on Milverton Road, Ikoyi, Lagos). The businessman was detained on allegations of being involved in subsidy scam totalling of N22.4 billion. A report by Aigboje Aig-Imoukhuede led committee on Presidential Committee on Verification and Reconciliation of Fuel Subsidy Payments, had indicted him, alongside many oil marketers. And the committee had forwarded details of its findings to the Special Fraud Unit. Ubah spent about 11 days in detention, and was released on October 19, 2012.

His problem multiplied at Special Frauds Unit when Coscharis Motors’ Cosmos Maduka submitted a petition against Ubah, alleging a N21 billion default in an oil deal. Promising to seek justice by all legal means to recover the loan (granted through Access Bank), the matter took a different turn when the case was instituted in London. And the London Court granted a freezing injunction, among which was listing Ubah’s worldwide assets, and only permitted him a $10,000 allowance per week (which was later varied to $15,000). The intention of the applicants is to get all Ubah’s assets across the globe, to eventually use them to offset the loan.

As the case in London raged, AMCON got an interim order from the Federal
High Court in Abuja permitting it to take over Capital Oil premises and many of its assets, including his Omole Phase 2, Lagos home. Ubah is fighting back to rescue his empire and save his business.

Ubah, who came into the public attention in 2011, with lavish adverts in pages of newspapers and a fabulous gig at Eko Hotel and Suits, has two private jets ( an Embraer 650 legacy and another smaller plane) with two grand Rolls Royce marques. The Nnewi (Anambra) born businessman has scores of properties in Nigeria and across the globe.