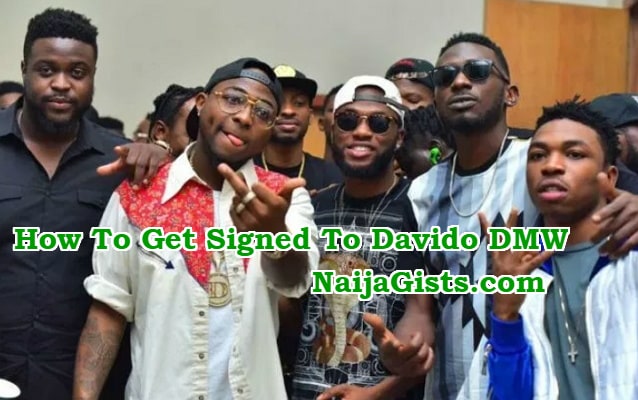 How To Join DMW: Get Signed To Davido DMW Record Label

Davido Music Worldwide, conveniently called DMW, is arguably one of the leading record labels in Nigeria today. And many aspiring/upcoming music artistes in Nigerian would cherish the opportunity to join the label. Hence, if you are an aspiring/upcoming music artiste who wants to join DMW, this article is for you! In this piece, we bring you exclusive guides on how to Join DMW.

To get signed to Davido DMW record label or any other prominent record label in Nigeria is not easy. Most times, an artiste requires much more than talent; a bit of luck is also needed.

Nevertheless, you can “create your own luck” or at least, make efforts to join your desired record label; which, in this case, is Davido Music Worldwide (DMW).

We have compiled exclusive guides on how to get signed to Davido DMW record label.

How to Join Davido DMW

Joining DMW, just like other record labels, basically rests on your ability to gain the attention of the record label’s CEO – David Adeleke, popularly called Davido. If you are talented and you are able to get Davido’s attention, you are already one leg in DMW.

It is on record that, most of the artistes under Davido went out of their way to gain his attention. This was the trend from Mayorkun to Dremo to one of the group’s latest acts, Peruzzi.

To join this set of artists, you can try your luck by using one or all of the methods outlined below:

Davido is currently the most popular Nigerian celebrity on Instagram, having in excess of 9 million followers. Also, he his known to be one of the few media-conscious Nigerian artistes who actively engage their fans on social media.

Reaching out to Davido through this channel doesn’t guarantee success, as the singer might decide to ignore all your advances. Nevertheless, persistence is key: If you persist enough, he might eventually decide to check out your work.

Furthermore, Davido is as good a musician as he is a businessman; hence, he knows a good investment when he sees one. And in an industry where music talent is fairly hard to comeby, he’s likely to hold firm to one when he sees it.

How To Get Signed To DMW Record Labels

So, if you are confident in your music talent, follow the steps below:

While this method might look mundane, it actually worked for the biggest (most popular) artist under DMW record label, in person of Mayorkun. If it worked for him, it can work for you too. Believe!.

Davido’s manager, Asa Asika, handles every managerial/administrative duties involving Davido and the entire record label. These duties, of course, include talent discovery/recruitment. Hence, Asa Asika surely has significant impact on who gets signed to DMW and who doesn’t get signed.

While Davido might show emotion and take pity on a prospective signee, Asa, who is a talent manager, would not. Bottom line, if you are not good enough, there is no way he’s recommending you to his boss, Davido. Nevertheless, you still need to gain his attention and make him review your song(s).

Not much is made public about the contact details of Davido Music Worldwide (DMW) record label. However, there are a number of channels through which they can be reached for bookings or enquiries.

Also, aspiring music artistes who want to join DMW can also shoot their shots via these channels.

Below is a list of DMW artistes, in the order of recognition and prominence:

David Adeleke, popularly called Davido, is the founder and Chief Executive Officer of DMW. In fact, the group was named after him.

Davido is arguably the biggest African musician today, and his platform, DMW, is one of the biggest music talent hub in the country; having discovered and developed close to ten music artistes so far.

Mayorkun, whose real name is Emmanuel Adewale Mayowa, is, without doubt, the leading music act of DMW, after Davido. He was among the first set of artistes signed by  Davido, some time in 2016.

Although Mayorkun parents are active entertainers, the singer reportedly met Davido on Twitter, where he was able to showcase his talent to him.

The Mayor of Lagos, as Mayorkun is fondly called, peaked last year, when he was voted “Next Rated Star at The Headies 2018”.

Fast rising rapper, Dremo, whose actual name is Aboriomoh Raymond Femi, started his music career since way back in the early 2000s as a 12-year-old kid. He made his breakthrough in 2016, when he was discovered and subsequently signed to DMW by Davido.

Today, Dremo has risen through the ranks and he’s widely regarded as one of the best rappers in Nigeria.

Peruzzi is probably the hottest property of DMW at the moment. He is not only a singer, but also a songwriter, who has been credited for writing some of Davido’s hit songs like IF, FIA and the likes. Perruzi’s latest hit collaboration with 2face Idibia (2Baba), Amaka, has earned him significant prominence in the industry

Signed by Davido around November 2017, Perruzi is fast moving up the ladder. And he earned a nomination for Rookie of Year at The Headies 2018. This year, 2019, shows a lot of promise for the singer.

B.Red, named Adeleke Adebayo, is one of the founding members of DMW, from the days of HKN. The singer is Davido’s cousin and they’ve been together in the music industry since way back in 2011.

Although, B.Red has not been as active as before, he dropped few songs in 2018, some of which include Kere, Run Come, Tire and more.

Sina Rambo (Sina Adeleke), who is an acclaimed rapper, took a short break from music in 2016, before making his come back last year. He, alongside Davido (his cousin) and B.Red (his brother), are the key founding members of DMW, with Davido at the centre of it.

After a brief absence, Sina Rambo made his return with a bang last year, when he dropped back-to-back hits titled Baba Sina Rambo (feat. Olamide) and Lamborghini (feat. Offset and Davido).

Idowest, who hit the scene with a banger titled Ji Masun (featuring Davido), is one of the fastest rising music artistes in Nigeria. Also among his list of hits is Omo Shepeteri and his recent release, Who.

Idowest, whose original name is Idowu Adekunle, is the latest signee of DMW, and he has hit the ground running. Within a space of less than a year, he has been nominated for several music awards. His debut hit song, Ji Masun, was awarded popular song of the year at City People Music Award 2018.

Olusanya Mayowa, popularly known as Ichaba, came aboard DMW’s platform after Mayorkun and Dremo. Although, he doesn’t enjoy much recognition, as a star musician, like the aforementioned duo, he is a well respected songwriter. As such, he is one most important members of DMW.

Yonda is probably the least known of the lot. He has been a member of DMW for about 2 years now, as he joined the music record label some time in January, 2018.

Despite being one of the oldest artistes on the platform, Yonda has not been able to establish his name in the industry. His most popular release, so far, dates back to early 2017, which was titled Las Vegas.

Apart from the above listed music artistes, there are quite a number of other individuals (professionals), who are incharge of management, production and promotion. These individuals constitute DMW crew members.

Prominent crew members of DMW include:

There you have it!

If you believe in yourself and you shoot your shots well; with a bit of luck on your side, you might just be the next DMW signee.