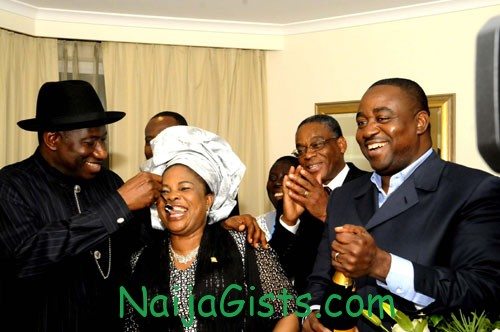 The spokesman of Nigeria’s First Lady Patience Jonathan, Ayo Osinlu is at the moment arguably the most popular media aide in the country. He is having a slice of the presidency fame hitherto enjoyed by our ‘runaway’ friend Dr Reuben Abati until recently joined by self-styled ‘attack dog’ Dr Doyin Okupe. We never heard much from him before the Africa First Ladies Peace Mission Summit – an event overshadowed by the car-purchase saga – and the appointment of his boss as a permanent secretary in the President’s home state, Bayelsa.

Sounding rather undiplomatic; “Nobody is going to put a gun on my head and force me to talk when I have no fresh information. My position is not different from what I told Daily Trust.” And when asked Madam’s return, he blurted “I don’t know, I don’t have any information on that. You don’t expect me to call her and ask her, ‘when are you returning?’ Is she my mate?” I laughed till my tummy hurt the day I read the news. He was this close to invoking the god of thunder on the reporter. The poor man obviously was jittery, helpless and overwhelmed by the pressure of duty. I am sure he does now appreciate the extent of workload on his colleagues i.e. Abati and Okupe.

Sometimes I wonder why God in his wisdom decided to throw folks like us in a part of the world where people make simple things big deal. It is not a good development that in a country blessed with a million and one brilliant individuals including doctorate holders and professors, the knowledge of common verbalism unfortunately devoid many.

I fail to see what is difficult to understand in a phrase as plain as ‘public service’. My word! Simply put, Public Service is a service rendered in the interest of the public. What this connotes is that the moment you become a public servant, regardless of your office, there are certain things which morally you shouldn’t treat as a private affair, the people you serve must be informed. One, this gives no room for speculation and two, your constituents feel a sense of belonging because you have shown that you are not only sensitive but also trustworthy.

In November 2009, when late President Umaru Musa Yar’Adua was flown to Jeddah, Saudi Arabia, the entire nation was thrown into confusion; the present was befuddling, the future – obscure. That we survived that trying period is divine. His wife, Turai would not let closest relatives see him, talk less the then vice-president, Dr Jonathan, whom she and some powerful cabinet members considered a green horn.

He was treated as if he were an ordinary staff in the corridor of power instead of his boss’s right hand man. She was everyone’s enemy; every tribe had a name for her. In fact we call for her head on a platter and would have lynched her if she dared drive into somewhere like Wuse or Kubwa without armed escorts. Now the tables have turn, the First Lady is away in a hospital in Wiesbaden, Germany because of an ailment they wouldn’t reveal. Shall we now demand the President’s head too?

I am most disappointed in the country number one citizen. He has once again shown how weak he is. Few days after his wife was flown out, it was reliably gathered that the President met his media aides and asked that a statement be released to put the records straight and clear the air on an issue that has become another national embarrassment. Thereafter, he made a quick U-turn after meeting his kinsmen; a bunch of people that will lead him astray if he doesn’t take care.

What on earth was GEJ thinking anyway? I bet he was under the illusion that we wouldn’t know. How could anyone in a country where social network is the in-thing? Millions of people stood under the sweltering April sun to ensure he gets to Aso Rock and then he betrays them by accepting the lecture of his people even though he knew the right thing to do. Na only dem vote for am! He dances to the whims and caprices of the hawks that keep deceiving him; it is saddening, sickening, annoying. I cannot believe the president learnt little or nothing from his former oga’s situation.

I wish Mrs Jonathan speedy recovery and good health thereon. But upon her arrival, she should come down from her high horse please; her ego is regrettable and I am pissed. Madam has every reason to thank her Creator; she presently occupies a position that is almost every woman’s dream so why does she act as though her elevation is man-made.

Her husband is in the villa today by providence and one expects that she remain humble and respect everyone around her. Take for instance her stand-off with Turai over a land. What is in a land? I thought she’s a Christian. Both holy books teach that we shall leave everything we own on earth so why tight your fist on what you cannot take with you when you die. My thinking is that she was trying to pay her predecessor in her coin but she doesn’t need such.

The president should eat the humble pie and apologise for what he (and those who ill-advised him) are putting us through. If I were him, I will come out on national television, explain the condition of my wife and urge the good people of this country to remember her in prayers. Even with disagreements in our political and ethnic affiliations, I like to think no one would wish her dead. Hiding the health state of the wife of a nation’s leader is condemnable; it is a wrong step in a wrong direction.