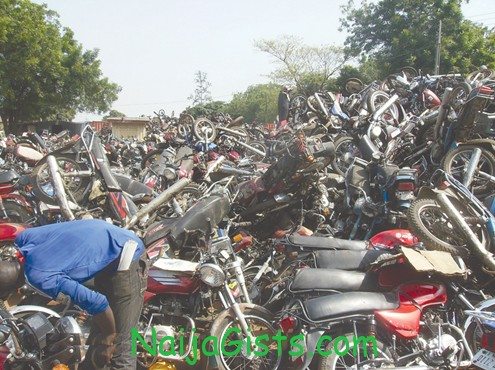 Several commuters were today stranded as the Lagos State Government withdrew its BRT buses from Ikotun-Iyana Ipaja axis to save them from attack.

Witnesses said the Okada riders in their hundreds hauled stones on the only BRT bus and destroyed its windscreen before policemen started shooting to disperse them. No arrest was made.

Chairman of Okada riders at nearby Ijaiye Ojokoro bus stop, Adebiyi Adewale exonerated his members alleging that hundreds of commuters were stranded this morning along Abule-Egba/Kollington axis.

Speaking with reporters Adewale claimed the angry stranded commuters vent their anger on policemen who he said were overzealous and arrested Okada riders indiscriminately even on the interior roads where their operations were not banned.

“Policemen were arresting Okada riders indiscriminately as if it was a total ban on Okada. They arrested our members who were plying roads that were not banned. They collected N15,000 from each Okada rider arrested,” Adewale alleged, appealing to Lagos state government to ensure justice was done as law abiding Okada riders were injustly punished by policemen.

Meanwhile, an estimated 3,000 motorcycles, have been impounded by the police who are enforcing the Lagos traffic law.

The office of the Lagos State Taskforce on Environmental and Special Offences (Enforcement) Unit is filled with the impounded bikes. The taskforce office is the place where motorcysles seized by the various police stations are dumped.

Checks at the taskforce office on Monday revealed that over 3,000 okadas have been seized in the last seven days when the police began the clampdown on the riders plying the 475 prohibited routes in the Lagos metropolis.

One of the dump sites at the taskforce office was already filled with impounded okadas while a second place was created and was almost filled with bikes on Monday.

We observed that trailers, lorries, pick-up vans, among others loaded with seized okadas lined up for their turns to offload impounded motorcycles.

A police officer, who craved anonymity said on Monday alone, over 100 seized okadas were brought to the taskforce office, saying that more were still coming.

Some of the operations were led by the Deputy Commissioner of Police in charge of operations, Tunde Sobulo.

A senior police officer, who also craved anonymity, told our reporter that thousands of okadas have been seized, saying that the operation would be sustained each day until no okada rider was seen plying the 475 prohibited roads.

In several parts of the metropolis such as Ikeja, Agege, Alausa, okada riders have deserted the banned routes in fear of arrest while the few who dared to ply the routes did so with eagle eyes.

At the weekend, Governor Babatunde Fashola declared total war on okada riders, vowing to stamp them out of the restricted routes.

He said the enforcement of the ban by the police was just a tip of the iceberg of what would befall recalcitrant okada riders saying the police action was just to test-run how the raid on okada riders would be.

The governor added that by the time officials of the Lagos State Traffic Management Authority, LASTMA, Kick Against Indiscipline, KAI and other security agencies joined in the enforcement, there would be no hiding place for okada riders.

The ban on motorcycle operators took a new dimension as police Monday began to arrest policemen riding motorcycles on the 475 prohibited roads in Lagos.

When reporters visited some of the stations, some policemen who were apparently victims of the arrest were loitering around.

They lamented that since implementation of the traffic law is their primary responsibility, policemen should be excluded from the arrest.

At Area ‘F’ Police Command, Ikeja, an Assistant Superintendent of Police whose motorcycle was impounded was tongue-lashed by a senior officer who ordered a junior officer to take the motorcycle inside the station.

At Abattoir Police Division under Area ‘G’ Police Command where the Divisional Police officer, DPO, is said to be on casual leave, at least 10 policemen in uniform including mobile police officers were seen trying to plead with their colleagues to release their okada because they were on their way to office.

According to one of the mobile police officers who was arrested at Abattoir Police Station who craved for anonymity, policemen who enforced the traffic law are overzealous and acting outside the directive of the state government.

There are indications that many okada riders have sought refuge in neighbouring states such as Ogun and far away Edo in the wake of the massive clampdown. (PMnews)