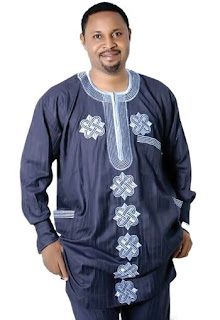 This biography of Saheed Balogun is brought to you by NaijaGists.com

Yoruba actor Saheed Balogun who was recently spotted with a new woman identified as his new wife has clocked 46.

Also called Saidi Balogun by his fans, he was born on the 5th of February year 1968 in Kwara State Nigeria.

On the 5th of February year 1967, the baby face actor who has featured in over 100 Yoruba movies and few Nollywood movies was born to the family of Mr and Mrs Balogun as Saidi Kolawole Alabi Balogun.

Few years after he joined the Nigerian movie industry, he met his now ex-wife, Fathia Balogun who is now a very powerful force in Nollywood.

The couple has two children together before their romance fell apart two years ago.

The actor later moved on with Yoruba actress Funke Adesiyan and few months into their relationship, Funke accused the actor of domestic assault and the relationship ended.

Last weekend in Bayelsa Saidi Balogun was spotted with an anonymous lady at the African Movie Academy Awards in Yenagoa.

According to eyewitnesses report, the actor whispered to the lady to avoid contact with the media.