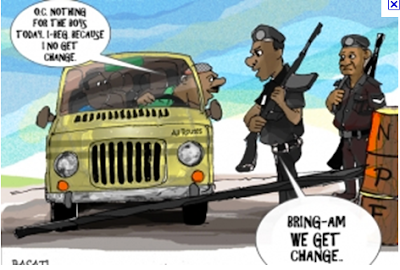 Four policemen attached to Ishasi Division of the Nigeria Police, Lagos State are presently being detained at the State Criminal Investigations Department, SCID, Yaba, Lagos over an allegation that they pushed an auto parts seller, Sunday Ndubusi Okoli to death over a N5,000 bribe.

According to reports Sunday was pushed off a moving police patrol van at Ishasi on Friday during an argument over the N5,000 bribe the police allegedly demanded from him. He fell off and hit his head on the road.

The spare parts dealer was reportedly arrested while on a motorcycle on his way to a filling station. While in the police patrol van, the policemen allegedly demanded for N5,000 bribe or they would seize and take his motorcycle to their station. The cops were said to be irked by the N500 which the late Sunday offered them.

They reportedly pushed Sunday off their moving van and he fell down hitting his head on the median. He died instantly.

Family and friends who learnt of Sunday’s arrest and the circumstances surrounding his death, went to the police station. They met the divisional police officer at Ishasi who informed them of the incident.

He assured them that his men found to be wanting in the incident that led to the spare parts dealer’s death will not be spared.

The four policemen who were involved in the late Sunday’s arrest including Inspector Ogolie Felix, who led the team, Corporal Innocent Odo and two others were later arrested and quizzed at the Ishasi Police Division.

Thereafter, they were transferred to SCID, Panti, Yaba for further interrogation.

A police source at Panti who craved anonymity confirmed said the four policemen are being detained at the Homicide section of the SCID for further investigations.

Meanwhile, the corpse of Okoli, 32, an indigene of Usofia village in Anambra State, Southeast Nigeria, has been deposited at the Isolo General Hospital mortuary for autopsy.

His family said they cannot talk on the late Sunday’s burial arrangement until after police investigations.

According to chairman, Ohaneze Ndigbo, Lagos Mainland area, Christian Chukwu Chukwudi, the family of the deceased, with the cooperation of Ndigbo, will move Sunday’s corpse to his home town for a decent burial at the completion of police investigation.

2 thoughts on “Policemen Push Man To Death Over N5,000 Bribe”