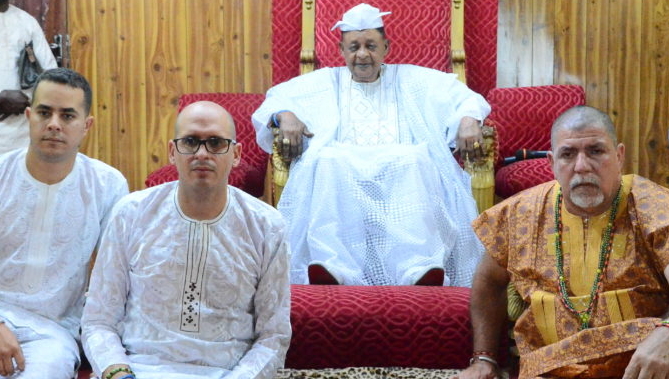 The Alaafin of Oyo, Oba Lamidi Olayiwola Adeyemi 111, has warned priests of Ifa traditional religion against desperation for ill-gotten wealth capable of bringing thecherished Yoruba culture and traditions into disrepute before foreigners.

Oba Adeyemi gave the warning today when he received three Cuban citizens who had been initiated as Ifa priests.

He said dissemination of truth about Ifa mythology and other traditional religions to foreigners is essential to ensure that the legacies of Yoruba forefathers are not bastardised and desecrated. 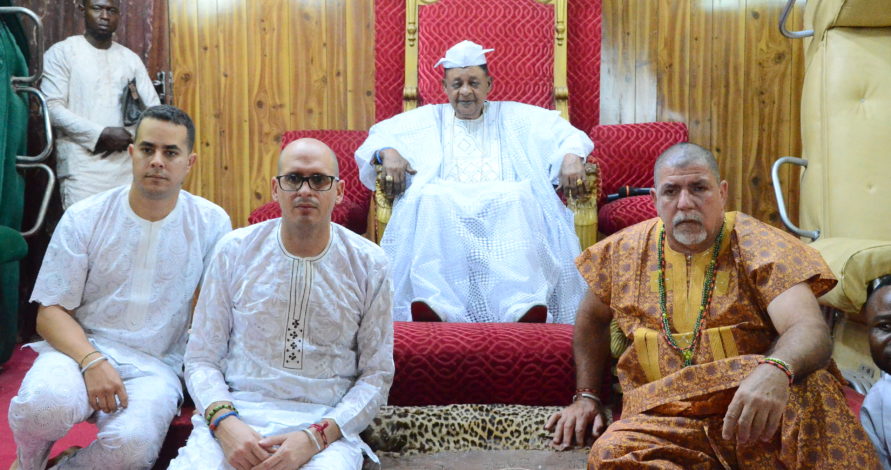 He cautioned that the porous and fraudulent awards of chieftaincy titles, especially to foreigners, by some Oyo Ifa priests must stop, adding that only Irokin and white caps must be used in their installation, rather than the crown and staff of office used by priests.

‘’No matter the mastery of Ifa traditional religion and proficiency of its practice and mythology, no practitioner has the right to confer on anyone the title of Ifa king and presents such person with staff of office. As an Ifa priest, you are to interpret the oracle and not to confer chieftaincy titles. It is illegal and unconstitutional’’.

‘The royal father who expressed dismay over disregard to the due process of Oyo traditions before the installation of foreigners as Ifa priests by some disgruntled adherents of the traditional religion, said every culture has an explanation for the creation of the Universe.

According to him,’’the Yoruba traditional beliefs see the world as a product of two connected worlds; the visible world of material life and the invisible spiritual world. The connection of these two worlds produces power that is called ASE in Yoruba cosmology’’.

For the Yoruba, Alaafin stressed that the Creator rules over the entire universe manifesting the elements of nature, adding that these indigenous beliefs and practices are a life philosophy and natural science.
‘’We see the relationship of man with nature and universe. Revealing the ways in which humans can be in harmony with the energies of nature and the universe. It is the basis for understanding the beginning and end of life.’’
Alaafin noted that all the elements of the visible world are symbolized as Orisa in the invisible world. using the instance of Sango, which he said the energy symbolized by light as a major element in creating the universe.

With the belief of re-incarnation, Oba Adeyemi argued that each of the Orisa after their ascendance soon revisited the earth with evidence.

‘’Oyo metropolis not only remains centre-piece of Yoruba nations world-wide, but Mecca and Vatican of the richest culture and traditions in the universe.
All traditional religions, including the Ifa, are registered under one umbrella called ASA ORISA. All the religions under the authority of the Alaafin are independent of one and another and co-exist harmoniously. The same is applicable to both the Islamic and Christian religions. This is the reason why there can never be ant religious upheavals in the metropolis. There is no way anyone or group from this association can operate in isolation and disregard to the due process and succeed in their motive. They cannot go away with it’’.

‘’Our traditional religions are part of our heritage, which needs to be jealously preserved from bastardisation for pot of porridge.’’
Expressing delight that in spite of the assaults and attacks by Western powers in the past, the paramount ruler argued that Yoruba culture and traditions had demonstrated its resilience and beyond that relevance in a troubled and confused world.

‘’Yoruba culture, Oba Adeyemi pointed out, is today spreading across the globe and attracting many studies. Yoruba is the best studied African civilization and has attracted the attention of the largest number of scholars, leading to the production of impressive number of publications. In everything, be it science, astrology, dressing, language, social sciences and even businesses, Yoruba remains the pace-setter. There are empirical data and proven track records to show for this assertion’’.

Earlier, the Cubans turned Ifa priests who came from Florida, USA, spoke through a representative in Spanish language and was translated.

According to their spokesman, Dasiel Guerra, they were in the palace in acknowledgement of Oyo as bulwark of Yoruba culture and traditions, and the Alaafin as the custodian, as well as intimate the royal father of a Yoruba cultural organization established about thirty years ago, seek for his support, and guide.