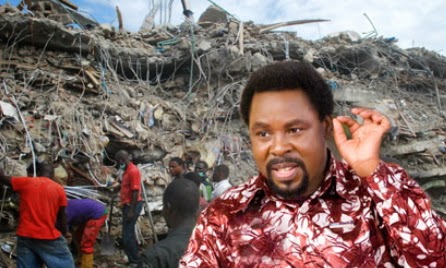 The latest report coming from relatives of victims of SCOAN tragedy and the government of South Africa is that over 300 South Africans were inside the building that collapsed in Ikotun Lagos last week Friday.

According to South African Government Spokesman, Mac Maharaj, more that 67 South Africans were killed in the rubble with many others still unaccounted for.

Maharaj said out of the 133 rescued alive were 130 South Africans and 67 out of the 70 dead bodies recovered have been identified as their people.

He further alleged that the rest victims trapped in the rubble of the collapsed building are South Africans who are followers of Nigerian Pastor Temitope Balogun Joshua, the founder of the Synagogue Church Of All Nations.

The 6-storey building that has served as guest house to foreigners from different countries collapsed on Friday when 3 extra stories were being added to it.

Led by the charismatic “Prophet” T.B. Joshua, the Pentecostal church attracts a global following of Christians who believe Joshua is able to perform miracles including curing the ill and raising the dead from the grave.

Many South Africans have reportedly flocked to Lagos to look for their missing relations.

May their souls rest in perfect peace and may God grant their family members the fortitude to bear their loss.