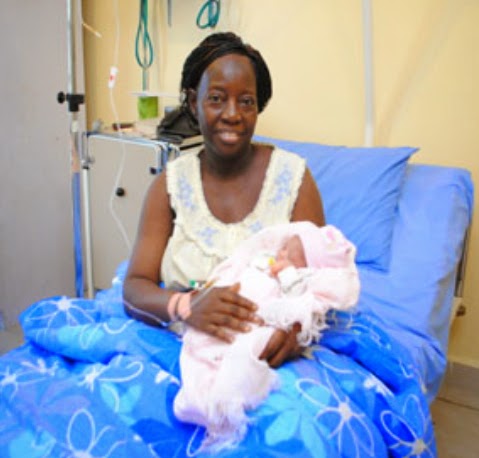 June 18, 2014 – Oldest IVF Mother In Africa Emerges From Nigeria; 60-Year-Old Woman Gives Birth To Her First Baby Through IVF In Lagos After 31 Years Of Marriage

There is hope for women who think age is a big barrier to their conception.

A 60-year-old Nigerian woman just gave birth to a baby girl at a hospital in Lagos.

After 31 years of childlessness, Mr Omolara Irurhe has finally set her eyes on her own child.

After several attempt to give birth failed, she ended up in the most unlikely hospital and country in 2010 when she started an IVF (Invitro Fertilization treatment) at St Ives Hospital in Lagos.

This past Monday, what began as a seed hope four years ago culminated in the delivery of a bouncing baby girl.

Mrs. Irurhe becomes the oldest IVF mother in Africa. The global recognition for oldest IVF delivery goes to Rajo Deri Lohan, an Indian who in 2008 was delivered of a baby at 69 years.

The IVF Unit at St. Ives Hospital successfully aided the conception and delivery of the baby and has now equaled the United Kingdom’s record of IVF age delivery.

The team of doctors at the hospital was led by the Chief Medical Director, Dr. Tunde Okewale, who expressed joy at the successful delivery. Okewale said the physical condition of the mother – and not just the age – is a major factor that determines the success of conception and delivery through IVF.

“We treat only after strict medical check of couples. For us, age is not important in our decision to take her on; what was important is the physical condition of the mother. Older women generally make better patients in our experience,” Okewale said.

“I believe we should not limit God and what the doctors can do in this modern age. I believe this is the appointed time. I was very hopeful throughout the years I was childless and I remained focused on God. We went to many hospitals but we didn’t give up,” “We didn’t have much pressure, even though our marriage is cross cultural –I am Yoruba; my husband is Edo- but we remained hopeful,” .

Desmond Adekunle Irurhe was elated at the birth of his baby. When asked if she supported his wife going for the IVF he replied:

“ I supported her throughout because my wife was dogged and she believed in herself. When I saw her faith, I had no choice but to go with her. She kept telling me she would have her child”. “ The hospital didn’t give us any problem, they were very helpful and we thank them for the successful delivery.”

“I will advise couples who are trying to get a baby to try the IVF. My case has rekindled hope for the barren woman. I will say the couple should relax and take it as it comes, they will surely smile,”.  “ I don’t know if I will have another baby, but if the doctors say I can, I will try it,” she said, smiling.

“I give glory to God, we kept our faith in God, we believe this is God’s appointed time. – the mother said

This is a very good news coming from Nigeria.