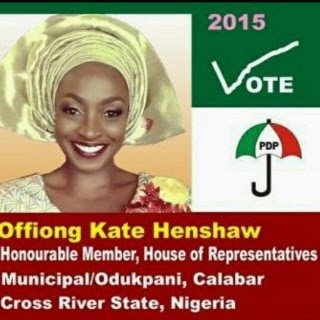 From humble beginning, Nollywood hunk and father of two sets of twins, Des­mond Elliot, has emerged one of Nigeria’s hottest actors. A couple of years back, Elliot, having conquered the silver screen as an actor veered into movie production and directing and within a short while carved another niche for himself. Obviously emboldened by his meteoric rise and success, the actor has announced his decision to contest for office. However, the actor is beginning to discover that politics is a different ball game entirely. As soon as his posters hit the internet, he became a laughing stock! Reason, Olusola suddenly popped up on the poster as his name. His critics are angry that he never identified with the Yoruba race until it was time for politics and the actor has become the butt of jokes online. However, Olusola is sticking to his guns and is poised to run for the Lagos State House of Assembly on the platform of APC.

Divorced mother of one, Kate Henshaw, is not left out of the 2015 political race. The star declared she will be contesting the seat for Calabar/Odukpani Federal Constituency at the House of Representatives on the platform of PDP during celebrations to mark her 43rd birthday. And she is making it clear she is not ready to ‘settle’ to get the slot. In a recent chat with Sahara Reporters, Henshaw had declared: “I am going with God and my heart. I’m not sharing money. If you continue sharing money, it will never stop. If you want true change, then vote for me and you will see the change. But if you want money, go for money and stay where you are and don’t even complain.”

Naive she might sound considering the challenges of running for political office in Nigeria. However, she seems determined and her eyes remain fixed on the Calabar Municipal/Odukpani constituency slot.

Anybody who says government office isn’t sweet should take a look at Bob Manuel -Udokwu. He has been there, seen it all and done it all and now he is not only contesting but he is also calling on his fellow en­tertainers to take a shot at politics.

The ex-Gulder Ulti­mate presenter who is currently a Special Adviser to Anambra State governor, Willie Obiano, on Nollywood and Entertain­ment, disclosed that his interest in repre­senting Idemili North Con­stituency at the Anam­bra State House of Assembly in the 2015 elections will be on the banner of the All Progres­sive Grand Alliance (APGA).

“Why are people raising eyebrow on it,” he queried in a recent interview. “A lot of people from other sectors have also gone into politics. There shouldn’t be an exception. In the US, a lot of entertainers are into politics. Why are journalists always asking

this question? We are often called political actors. I don’t see anything wrong in entertainers going into politics. I am proud I put Nigeria on the world map as an actor. There is nothing bad it if I do that in politics as well,” Udokwu said, calling on his fellow actors to join the train. ­

Popular Yoruba actress, Funke Adesiyan, is another entertainer vying for politi­cal office in 2015. She is running for the Ibadan South-East constituency slot in the Oyo State House of Assembly most likely on the APC platform. Friends and fans of the actress flooded social media recently with posters of the actress after she sent out a blackberry broadcast. Funke has featured in several blockbuster movies and a couple of soap operas.

Living in Bondage star, Kenneth Okonkwo, is not left out of the race for elective office in 2015. Though, he has not made an official declaration, insiders say the lawyer turned-actor and movie producer has wrapped up plans to join the race anytime soon.

“My people have been yearning for this and 2015 is on my mind. We want to take it one step at a time so I am actually eying a seat at the Federal House of Representa­tives. You know we cannot continue to leave politics for those that don’t care about our people’s welfare,” the native of Nsukka, Enugu State told close pals recently.

Clem Ohameze is another actor geared to run for office in 2015; he is eyeing the Federal House of Representatives. In a chat with The Sun recently, he justified his deci­sion when he declared: “Yes, I’m gearing up for 2015. There is what is called mobility of labour in Economics. When you feel ful­filled in a particular area, you want to move to another level so what you gain from here you apply there.

“But I’m not leaving the industry perma­nently. I cannot leave the industry because my passion and life are in the industry. But then, like I said, I would like to apply what the industry has thought me over the years somewhere else.

“I am very prepared. I cannot learn the use of left hand at my old age. That is the problem with this country! People see the truth and damn it, usually for selfish reasons. But we cannot continue with this business as usual mentality.”

Jibola Dapo is another actor warming up for 2015; he plans to contest for the Federal House of Representatives under the umbrella of the Peoples Democratic Party (PDP).

Making his declaration in an exclusive chat with The Sun, Dabo had declared: “First of all, I am someone who was born into a poor family. Regardless of the royalty in my lineage, I still grew up as a poor boy. So, I understand the pains of the people, the ills in the society and where the shoe pinches my people.

“I also understand that there are a lot of things that have been left undone, not just by the government but by successive govern­ments. An instance is in the arts and crafts where local raw materials can be used to create enor­mous wealth.

“I also understand the mistakes a lot of us made when we were young; running from the village to the city, forgetting that one could actually make it big back in the village, even better than those in the cities. From the experience I have gathered here and my years abroad, I know I can come back home and open the eyes of the youths.”