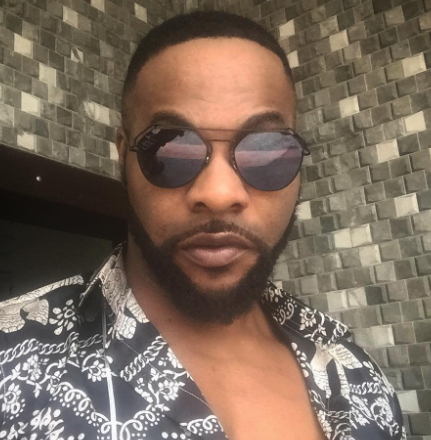 Nollywood actor, Bolanle Ninolowo (aka Nino) is an accountant, who also has a Masters’ degree in Marketing with specialization in Branding. He studied in the United States of America, where he worked as an accountant in a company called General Growth Properties in Chicago. Upon his return to Nigeria, he worked with Guaranty Trust Bank (GTB), and later went into acting.

In the world of make-believe, he chose to brand and market himself as Nino. He has featured in several films, among which are: Picture Perfect, Husbands of Lagos, The Guardian, Walking Away, Baby Shower, and Intervention. Many others are yet to be released. Today, he is the brand ambassador for OUD Majestic. At an event to mark the official launch of the perfume store at Murtala Muhammad Airport (MMA2), Nino spoke with Daily Sun about his firsts.

Rebirth. It was also my debut screen appearance. The plot of the movie was woven around HIV awareness and stigmatization.

It was Husbands of Lagos. That was in 2015. It was fantastic. It was about five husbands and the character I played was one of them.

It was scary. Everyone doing something the first time of their life, you would expect a bit of fright and later you overcome it.

Well, it happens. A couple of times. That was in the past. None that I can remember now.

I was raised in Chicago. My first trip to Nigeria was about eight or so years ago. I came to Nigeria in 2007. That was when I moved back. I’m back here to stay but if work takes me there, why not?

First income as an actor?
It was N10,000. I don’t think it would be proper to say the name of the movie. That was my first appearance.

You just prayed to get things right, to deliver right, to play the character right. That’s all you pray for, just to do it right.

It’s so fantastic. I’m elated, excited to get endorsement, to get recognized. It is a good thing for me. I love OUD. It’s a fantastic perfume and when I enter any place, people ask me what fragrance I use. I’m really cool with the brand.

Continue Reading
You may also like...
Related Topics:bolanle ninalowo, chicago