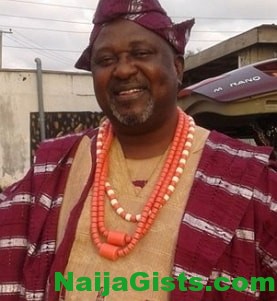 October 22, 2017 – Akin Lewis: To Woo A Girl Back Then You Have To Write Love Letter, Nowadays Just Look At Her, She’ll Follow You

Akin Lewis: In My Time 80% Of Men Waited For Marriage Before Having Children Because Ladies Were Hard To Woo

At the age of 22, veteran Nollywood actor who is now over 60 years was already living like a star.

While speaking with our Gold Myne recently, Akin Lewis, said when he became popular, there were no many stars and this made everyone to want to know him, including the then Lagos state governor.

He stated, “The speaker of the House of Assembly sent for me and they did not even know that I was a boy, who was playing the role of a 60 years old. It was a shock for me at first. And at that age, what did I care about? I had no one to look after so we were opened to everything. But luckily for me, hard drugs were not in the circulation then so I never took it. We never saw it i those days so it was just alcohol, cigarettes, girls and parties. We could attend parties in four states in a night. Many people died during that time. We could go to Oyo state, frolic there for about two hours and then headed to Ilorin where we could spend about two hours as well. From Ilorin, we moved on to Abeokuta, ended up in Lagos and then went back to Ife via Ibadan. All these I stated above could take place in one night.”

Despite having lived recklessly at some point, how come he didn’t get a woman pregnant at an early age? He reacted, “My time was different and the girls were raised well than the ladies of today. Those were the days you had to woo a girl. You had to write poems and love letters. These days you don’t need to woo any girl; just look at her and she will follow you. In our generation, you would rarely see people who had children out of wedlock. There were a few cases, but 80 per cent of us waited for marriage before having children.”