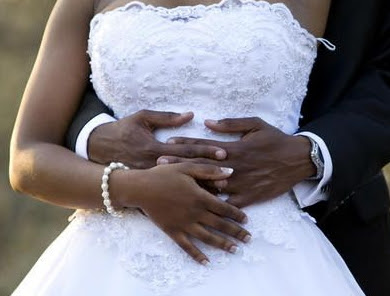 July 23, 2017 – Wedding Service  Of Anglican Priest & His Bride Cancelled In Abakaliki Ebonyi State After Jilted Girlfriend He Promised To Marry Leaks Photos Of Him Smoking With Prostitutes

Chaos was the order of the day yesterday in All Saints Anglican Cathedral, Abakaliki, yesterday when the wedding between a priest and his bride (names withheld) was abruptly cancelled by the Cathedral’s authority over the groom‘s alleged misconduct with ladies.

The priest is serving in the Cathedral while his bride hails from Umuchoke Mbaitolu, Imo State.

The couple had successfully celebrated their traditional marriage last Wednesday at the bride’s hometown in Imo State.

They were already seated with some of their guests in the Cathedral about 9:25a.m waiting for the wedding service to commence when one of the priests in the church, Ven. Kingsley Okoro, came in and announced that the wedding would no longer hold and asked everyone to go home.

Okoro, who said that the directive to stop the wedding came from ‘above’, did not disclose the reason for the cancellation of the wedding.

The celebrants were visibly shocked by the announcement even as their guests left the church in bewilderment.

It was not clear why the wedding was aborted by the Cathedral’s authority but Sunday Sun gathered that a complaint bothering on infidelity was lodged last Friday night against the priest.

One of the parishioners, who simply gave her name as Helen, told Sunday Sun that when she sought to know the reason behind the cancellation of the wedding, she was told by some parishioners close to the church authority that a girl the priest was dating lodged a complaint last Friday night to stop the wedding.

She said: “We are actually shocked and confused as you can see. “I was told that the groom had a girlfriend and that he promised to marry her but decided to settle down with another girl, which is the bride. They also told me that the girl reported the matter to our Bishop.

“They also said that the girl presented a picture of where the groom was smoking with some girls during her complaint to the Bishop. So, that is what they said that stopped the wedding and as you can see, some guests have started going back to where they came from,” she added.

She alleged that the groom was also accused of some bad behaviours including smoking and mingling with prostitutes.

Meanwhile, a notable evangelist who does not want his name in print said that the wedding of the couple had earlier been put on hold.

“They would have wedded two years ago but because of the groom’s lifestyle which landed him in a police case, the wedding could not hold,” he said. He disclosed that Grace had as a result quit the relationship but only reconciled with him few weeks ago and they re-scheduled the wedding.

“Since the church said that the wedding cannot hold, there is nothing we can do. The only thing is that the directive to stop the wedding came very late,” he added.

When contacted, the priest declined comment. Also, the Bishop of the Cathedral, Rt. Rev. Monday Nkwoagu refused to speak with newsmen who visited the Bishop’s court for his reaction.

He, however, directed a security guard to inform journalists that the matter was a church affair and as such there was no need reacting to it.

Some guests at the wedding service before it was aborted included former Minister of State for Power and Steel, Chief Goddy Ogbaga and Deputy Chief of Staff, Government House, Abakaliki, Professor Fidelis Okpata, among other dignitaries.

Disappointed over the development, they left the church after waiting for some time to know if the church would rescind its decision.

Sunday Sun sited the bride and bridal team inside a red Highlander jeep decorated for the team while the groom was inside one of the offices in the old church building with few parishioners.

Actor Baba Tee: I Was Born To An Urhobo Mother From Delta State & Yoruba Father From Ogun State
Children Of Woman Who Murdered Husband In Osogbo With Help Of Assassin Speak