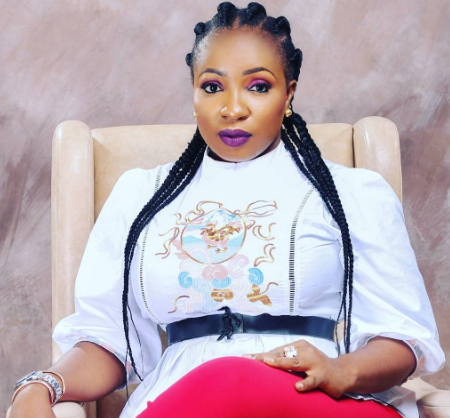 Nollywood actress Anita Joseph surely has a shapely body. Well endowed, her figure is hard to ignore. Meanwhile, Nollywood is known for sexual harassment incidents, and many say someone like Joseph could be an easy prey.

She refuted this. In a chat with Sunday Scoop, she said, “I have never experienced sexual harassment in the movie industry. I just concentrate on being the best, and I also work hard. I know how to handle my admirers in a polite manner. Some people who even had the intention of wooing me later became my good friends.”

Speaking on her sexy figure, she said;

“It is not like I go out of my way to flaunt my body. I thank God that I have a good physique. Initially when I got into the industry, I believed in flaunting what I had; and I don’t think there is anything wrong in that. However, as I have grown older in the industry, I have grown beyond those things. These days, I prefer to wear decent clothes that cover me properly.

However, even if I wear a free-flowing gown, my curves would still show. I have discovered that being covered up is even more classy and sexy than exposing delicate parts of the body. A lot of people don’t know this, but I’m actually born-again; a redeemed child of God. It is important to look beyond the outward appearance before judging people. There have been times I went astray, but the good thing is that God is a very caring father and he always accepts me back with love.”

“My ideal man would be someone who is very hard-working, and has the fear of God. He should also be someone who knows how to package himself well and look good at all times, as well as have a rich sense of humour. I don’t like fair complexioned guys, so I prefer my man dark skinned.”

“I once had an European lover who was ready to marry me. But I couldn’t accept his proposal because he wanted me to quit acting after marriage. And that’s something I cannot do. Entertainment is an integral part of me and it is what makes me happy. I don’t think I can quit entertainment for anything.”

Angela Okorie: No Sugar Daddy Is Funding My Lavish Lifestyle
Nigerian Pastor Chris Okafor Stages Another Fake Miracle.. See How He Blinded A Witch In Church