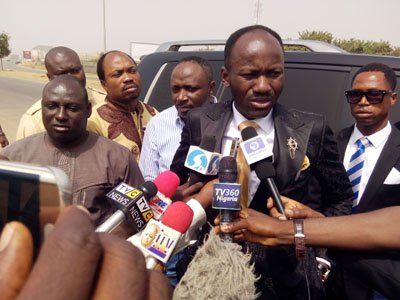 Omega Fire Boss, Apostle Suleman has been let go by the officials of the Department of State Services.

The cleric who changed his mind at the last minute by letting go of the 30 lawyers Ekiti Governor hired for him arrived at the agency’s office around 7:32pm.

He was released around 10:48pm amidst cheers from his church members, friends and family members.

Because he was released late last night, we couldn’t get much details from his spokesperson.

A source close to the cleric said:

“He didn’t go with any lawyer. He was interviewed in a friendly and professional manner and released three hours later”

His spokesman Phrank Shaibu in a text message to our correspondent promises to provide more details tomorrow.