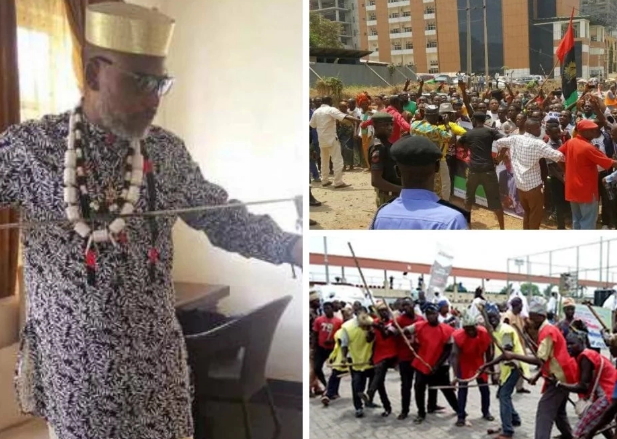 August 25, 2017 – IPOB Orders All Igbos To Leave The North Before October 1st 2017 As Arewa Youths Petitions UN To Label IPOB A Terror Group

IPOB has rejected the withdrawal of the quit notice issued to Igbos in the Northern part of the country by the Arewa youths.

The Arewa youths, under the aegis of Coalition of Northern Groups, had ordered all Igbos residing in the North to vacate the region before October 1, 2017.

But, at a press conference attended by the Chairman of the Northern Governors Forum, Borno State Governor, Kashim Shettima, in Abuja on Thursday, the Arewa youths said they have withdrawn the quit notice.

The Northern youths, who announced the decision through their spokesman, Abdulaziz Suleiman, in the same breath said they would continue to pursue “petitions to the United Nations and the Nigerian federal authorities calling for appropriate sanction of Nnamdi Kanu, other IPOB leaders and their sponsors in addition to labelling them a terror outfit”.

However, reacting to the development, IPOB described the withdrawal of the quit notice as ‘inconsequential’.

Speaking through its Media and Publicity Secretary, Comrade Emma Powerful, IPOB asked the Arewa youths to ‘stick to the quit notice’, if they have any ‘honour’.

The group equally urged all Igbos and other Southerners resident in the core North to discountenance the withdrawal of the notice and return home.

IPOB noted that history had shown that the withdrawal of the notice does not mean that Igbo lives and property are no longer endangered in the North.

“It is inconsequential to IPOB whether the ‘quit notice’ was rescinded or not because it will in no way impact the pace and direction of our effort to restore Biafra.

“Threats don’t have any effect on us, so our advice to the Arewa North is to please stick to the October 1 deadline or else they have no honour.

“We urge all southerners in the core North to return home before October 1 as history will most definitely repeat itself.

“Southerners were massacred in the pogroms of 1966 and 1967 after similar assurances were issued then that people should remain in the North,” the IPOB spokesman said.

The pro-Biafra group alleged that the ‘quit notice’, which it described as an incitement to genocide, was endorsed by Northern political leaders.

“The presence of a serving governor and senator of the Federal Republic of Nigeria during the supposed press briefing confirms what we have always known that the incitement to genocide, which is what the ‘quit notice’ is all about, has the blessing of the Arewa political class,” Powerful said.

Just as the Arewa youths have insisted on the re-arrest of IPOB leader, Nnamdi Kanu, IPOB also urged the Federal Government to arrest leaders of the Northern group.

“If President Muhammadu Buhari is at all serious about clamping down on hate speech, he should arrest those behind the ‘quit notice’ along with their sponsors,” IPOB said.

“Trying to drag the name of our leader, Mazi Nnamdi Kanu, into their unintelligent blood fest will be resisted.

“If the idea is to cow our leader with calls for his arrest, then those behind the genocidal edict of ‘Igbos must leave the North’ are even dumber than we thought.

“Nigeria is crumbling today before our eyes due to the arrest of Mazi Nnamdi Kanu; those wishing for him to be arrested again are basically signing the death warrant of Nigeria,” the secessionist group added.

Vowing that IPOB would not relent in its quest to restore Biafra, Powerful stressed that the group was not afraid of what he described as the ‘fabled Fulani hegemonic juggernaut’.

Continue Reading
You may also like...
Related Topics:arewa youths