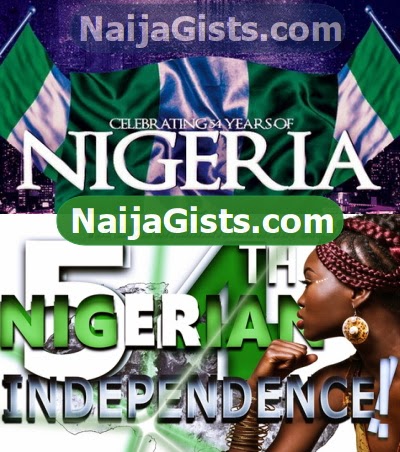 Sept 30, 2014 – As We Celebrate Nigeria’s 54th Independence Day, Here Are Our Challenges By Comrade Jari

Nigeria At 54: Prospects & Challenges Of Building A Nation

By October 1st  Nigeria will mark its 54 anniversary since its independence from colonial in 1960. More over, it is this same year that Nigeria clocks 100 years since its creation in 1914.

Nigeria, a country to over 170 million people is undoubtedly the giant of Africa as it constitute nearly 1/5 of the population of the whole continent.

Nigeria is a home to over 300 ethnic and cultural backgrounds across the country. Nigeria also has many religious believes; among which islam and Christianity are the 2 major religions.

Nigeria has witnessed a lot of developments and challenges in its quest for nation building.

The peak of it development is the independence and self rule. It golden time is during the first republic. It most challenging time is the current insecurity. Against all odds, Nigeria is still a single country under the same leader.

Our dear nation is yet to take its rightful place in the community of nations. Corruption, electoral mal-practice, rigging, bribery, bad leadership, immorality etc still remains an impediment to our aspirations and our rightful place.

Economical development and industrialization is gradually staging a come back again like in the 1960s.

Literacy and education development is fast becoming more accepted. A lot of young Nigerians now have masters and doctorate degrees in various fields both in Nigeria and abroad. A lot having the best results in the foreign schools they attended.
Civility and civilization is finding its way into ,Nigeria. Just about 12 years ago mobile networks were first allowed into Nigeria, now ,igerian is one of the largest market in the world.

A lot of associations and NGOs are now legally opened in Nigeria. A lot of them are contributing positively to the development of the country. Many are still under way as people do now see vividly the importance of such associations.
Democracy and stability in civilian rule is consolidating its stay. It 15 years now since

The return of civilian leadership. For the first in 2007 we witnessed transition of power from civilian to civilian – that was another milestone achievement.

On the contrary, we still have a lot of challenges to over come if we truly wants to be a nation to reckon with. Corruption still remains a negative factor to Nigeria. The leadership of the country must take it serious. That must be stopped for our nation to be a disciplined and a prosperous nation.

Literacy and education must be made free and accessible. Since Nigeria is a mixed economy country, basics like education must remain in the hands of the government. No to privatization of educational sector.

With the population of over 90 million youths from the age of 15-45, employment and jobs opportunities should be made the top long and mid term. Top priority plan of the both the federal and the state governments. Stable and prosperous youths remain the answer to Nigeria’s peace and security. This is because it is the youths that are been turned to political thugs, thief, and even militants that will later come back and fight the government.

Among other challenges include sectional and tribal sentiments and divisions between Nigerians. The government shall try to unite the people of the country more so as to have a united and strong country for the people.

We remain in prayers and support to our beloved fatherland (Nigeria) and our leaders, that God guide them right and protect us.