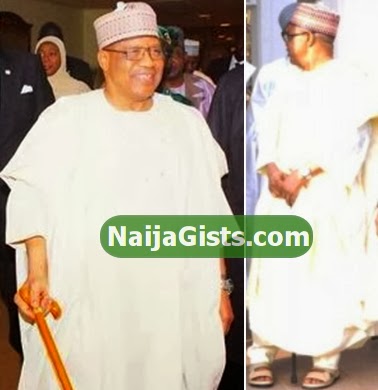 In what some Nigerians called God’s judgement, former dictator and Military ruler of Nigeria, General Ibrahim Badamosi Babangida, IBB is now unable to walk without support.

In early February, he was spotted holding on to a walking stick at the Council of State meeting that held in Aso Rock Abuja.

He was also spotted at the Centenary Awards that rocked Abuja on Friday using a walking stick.

The 72-year-old ex Head of States was said to have suffered gunshot wounds during the Civil War (1967 to 1970). Sources claimed the wound has been a secret source of pain to the former dictator.

After carrying out several surgical operations in Germany, it appears that the condition hasn’t improved.

At the recently concluded Centenary awards, IBB paraded a smile at intervals as he chatted with former Presidents, belying his pain.