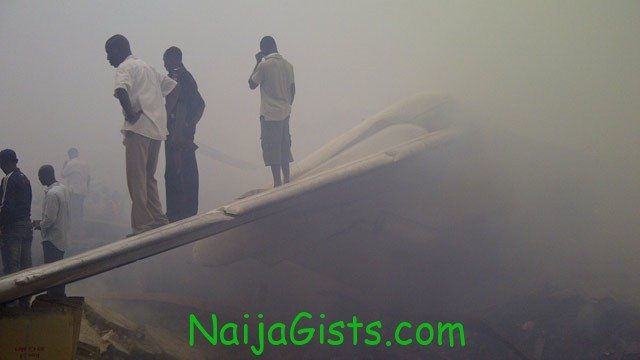 We have wept. We have grieved. We have mourned. We have asked questions after questions and yet, as if there is a conspiracy against our sorrowful minds, the right answers are blowing in the wind. The more one thinks about the black Sunday and its devastating and monumental fall outs, the more exasperated one becomes.

The sight of hapless Joel, Esther and Chisom Okwuchukwu, who have suddenly become orphans, in such a cruel fashion, would make even a heart of steel melt. That the world of these innocent children had suddenly collapsed in a spate of five minutes is enough to send cold chill into the spine of the toughest of men. Poor children! They lost the two most important people in their lives, their mum and dad, in an incidence that remains more like a scene from a Nollywood movie.

However, when considered side by side with the fate of poor America based Maimuna Anyene who died in the crash alongside her husband, four children and mum, perhaps, one might conclude that Joel and his siblings are luckier. After all, it is often said that when there is life, there is hope.

Such was the crude nature of the black Sunday that has shattered dreams, aborted hopes and murdered sleep. However, now that the mournings are over and we seem to have started picking up the pieces of our shattered lives all over again, it is essential for us to take stock of events, of the past few days, and reflect soberly as a people in order to learn vital lessons. This is what is expected of a sane people in a rational society.

As a prelude to setting this process in motion, we need to seriously review our attitude, as a people, to the sanctity of human life. In the last one year, so much blood has been spilled in the land. We have become so daring that the quest for blood has moved to places of worship.

Policemen, journalists, soldiers, youth corps members and other innocent men and women, have suddenly become targets of cold blooded killers. Hitherto revered places such as the Police Headquarters and UNICEF Headquarters have been hit by the bullets of people searching for blood.

Now, the tragedy is really not in these acts of blood spilling, rather it is in the effectiveness of our response.  Thus far , we seem to be getting used to a stereotyped form of response. First, different people pay visits to sights of gruesome murderous acts, commensurate with those involved, promise heavens and earth until there is another incidence when the whole circle will be repeated all over again.

If we are serious about the sacredness of human life, we need to take more decisive steps to reverse the trend. Three days before the black Sunday’s incidence, a black Thursday was witnessed at the Shagamu end of the Lagos-Ibadan expressway where over eight petrol tankers and numerous other vehicles were burnt in an accident that involved the spilling of over thirty thousand litres of petrol.

Despite the wide reportage of the incidence, in nearly all national dailies, hardly did one hear any official comment on it from relevant quarters. Not even a word from the usually loquacious National Assembly. And yet, some lives were wasted in the accident that brought the nation’s number one expressway to a standstill. We have now gotten so used to suicide bombing that the church bombing incidence in Bauchi, same day with the Dana crash, suddenly become no news.

That the Lagos- Ibadan Expressway and other such vital roads in the country have, over the years, become death traps, is no longer news. Sadly, we have continued to go about as if all is well. The process for the rehabilitation of the Lagos- Ibadan Expressway, for instance, has been on for God knows when, but no one actually knows when work will commence on the road.

Meanwhile, Nigerians, young and old, have continued to meet their untimely death along the road. A serving Minister, perhaps out of genuine concern, once wept openly over the sorry state of the Benin- Ore road. Same individual is still in government and it is hard to say if the condition of the road that provoked the tears has improved.

In recent time, most of our leaders prefer to travel through faster and safer modes such as private jets, commercial air busses and helicopters, leaving their miserable citizens, as usual, to their fate on the road. Now that there seems to be trouble in the air, they have suddenly found their voices. Everybody has begun to talk. Now, we are beginning to hear all manners of talks. Everyone wants to be noticed. Talk, talk, talk and more talks is what we know best.  Sadly, the talks have not stopped us from losing our best brains thereby throwing homes into unending sorrows, in very avoidable ways.

Despite our penchant for unnecessary talks, we can’t fix elementary challenges such as making our roads safer, making our hospitals work, safe guarding life and property, ensuring regular power supply, protecting investments among others. Hypocrisy and deception have become a national past time. We tell lies in very shameless fashion, both leaders and followers. As for the followers, we have turned our leaders into semi gods, telling them only what they want to hear for selfish reasons.

How disgusting it was to hear some sycophants blabbing that this is the first time that a President will respond to national disaster in such an excellent manner as did President Jonathan. Dear President, don’t ever listen to such voices. They were the same men that misled Chief Obasanjo. They were the same people that said late President Yar’Adua could rule from any part of the world. All they care about is a share of the national cake. They don’t care whether Nigeria burns or breaks.

•Ogunbiyi is of the Features Unit, Ministry of Information and Strategy, Alausa, Ikeja.

Nigeria: A Nation In Distress
I Decided To Commit Suicide To Save Myself From Shame