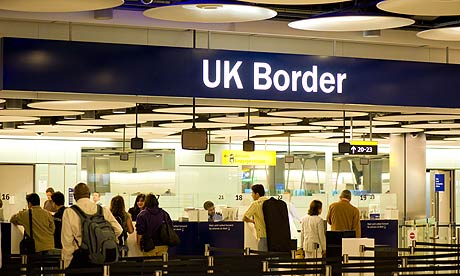 A report from a United Kingdom based journal, University World News, has said the £3,000 visa pilot scheme against Nigeria was proposed by the British intelligence service, MI6 and British police headquarters at Scotland Yard.

The new UK visa scheme will impose £3,000 (US$4,740) in charges on unspecified visa applicants thought to be ‘high risk visitors’ from Nigeria, Ghana, Bangladesh, India and Pakistan.

The Nigerian government has threatened retaliatory measures if London goes ahead with the ‘refundable’ but unpopular visa bond.

The report said there was palpable anger and disappointment among Nigerians who have gained admission into British universities for the upcoming academic session.

Students already in UK institutions are also unhappy about a new ‘visa bond’ scheme to be implemented against ‘high risk’ visitors by the David Cameron’s administration.

As a precautionary measure, many parents have instructed Nigerian banks to suspend, for now, sending tuition and accommodation fees to British universities, the report noted.

The report written by Professor Tunde Fatunde, a Nigerian scholar quoted diplomatic sources in Abuja, as saying that both the M16 and the

Scotland Yard, are reportedly worried that some foreign students who apply for visas to study in British universities have developed, in their home countries, ideas and determination to commit terrorism on British soil.

The report said, the visa bond is believed to be a subtle way of ensuring that students who are labelled as ‘high risk’ know that they will be targets of intelligence surveillance while they are studying at British universities.

It quoted a diplomat, who did not want to be named, as saying that Ghana was included on the ‘high risk’ country list because its airport and seaports were thought to be avenues for Latin American drug cartels who use some Ghanian students as drug couriers.

The same diplomat said some students from Nigeria, Pakistan, India and Bangladesh had been involved in terrorism in Britain.

He cited the examples of Umar Farouk Abdulmuttalab, a Nigerian and former student of University College London, who tried to blow up an American plane in December 2009, and student Michael Adebolajo, a Nigerian-born Briton, who recently hacked a British soldier to death.

“The British government is convinced that the use of visa bond may go a long way to make Britain safe,” the diplomat said.

The diplomat also revealed that the visa bonds would be extended to some non-students thought to be high risk and hinted that British embassies might collaborate with local intelligence services in collecting evidence on some visa applicants.