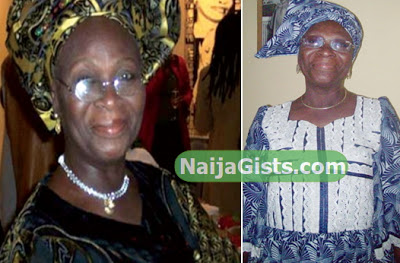 A family source told NaijaGists few minutes ago that veteran Nollywood actress Bukky Ajayi died of heart attack at the age of 82 around 9am today.

Though it was earlier reported that Madam Bukky Ajayi died in her sleep, the source said mama was in a coma when she was rushed to the hospital but she died almost immediately doctors attended to her this morning.

Another close family friend said the the veteran actress suffered a major heart attack on Sunday and was rushed to the hospital.

She was discharged on Monday and placed under close medical watch before she breathe her last breath today at the age of 82.

Her body left her residence at 20, Alawode Street, Surulere, Marsha, beside Kilo Hotel around 4:28pm today.

Madam Bukky Ajayi was laid to rest at Atan Cemetery in Yaba Lagos around 5:30pm.