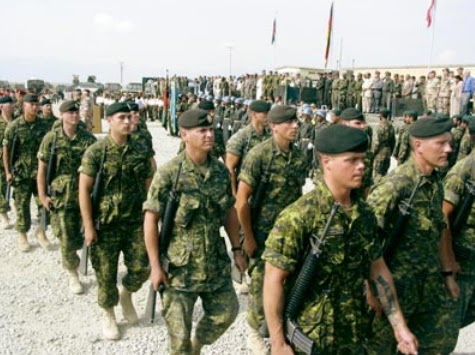 Few days after Canadian government shipped surveillance cameras to Nigeria at the request of Vice President Namadi Sambo, Canada has deployed soldiers and experts that specializes in hostage extraction and rescue to Nigeria.

The Canadian government is tight lipped on where the forces will arrive in Nigeria but help is on the way.

The special forces will join US troops already on ground in Nigeria.

“Who they are and what they’re doing is being kept under very tight wraps out of fear that their safety could be compromised if we talk too much about what they’re doing or if we expose any kind of identities that could put them at risk to be targeted,” – CTV’s Mercedes Stephenson reported on Monday

Meanwhile, the United States said it is flying “manned” missions over Nigeria in search of over 200 abducted schoolgirls, after the Lagos government dismissed a prisoner-swap offer from the Boko Haram kidnappers.

“We have shared commercial satellite imagery with the Nigerians and are flying manned ISR (intelligence, surveillance and reconnaissance) assets over Nigeria with the government’s permission,” a senior US administration official said Monday.

The official declined to be named, and it was not immediately clear what kind of aircraft were being deployed, nor where they were based