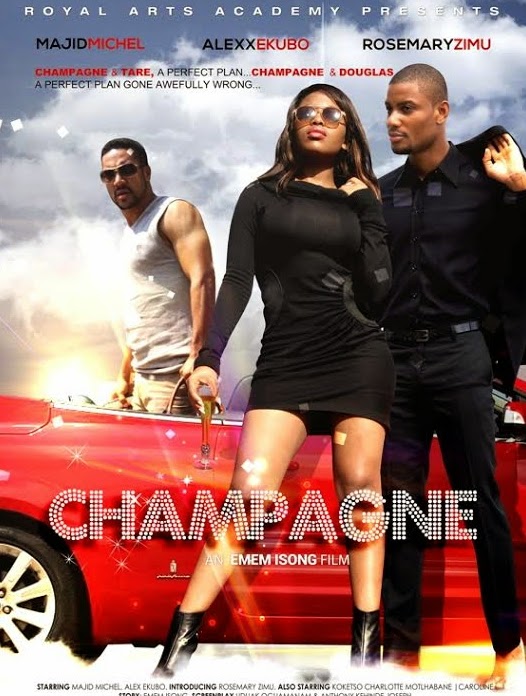 The movie titled Champagne is a romantic thriller about a couple in an open marriage whose habit of dating unsuspecting people for money and perks, takes an unexpected and decidedly dangerous turn. CHAMPAGNE was shot in Johannesburg and Houston. It stars Majid Michel, Alexx Ekubo, and South African actress, Rosemary Zimu. Also in the movie are Tana Adelana, Mbong Amata, Susan Peters, Padita Agu, and Anita Chris.

The premiere of the movie will hold in Lagos on December 19, 2014. It will also be released at cinemas across Nigeria on the same day. This excellently produced and brilliantly acted movie is one that movie-goers cannot afford to miss.

Emem Isong already established herself as one of the most outstanding and successful producers in Nollywood, with movies such as RELOADED, GUILTY PLEASURES, and BURSTING OUT. However, CHAMPAGNE is her first outing as a director.

A young couple couple (Alex Ekubo & Rosemary Zimu) who are in an Open marriage, date unsuspecting people mainly for money and perks until they bite off more than they can chew when they meet the enigmatic Mr. Douglas (expertly played by Majid Michel).