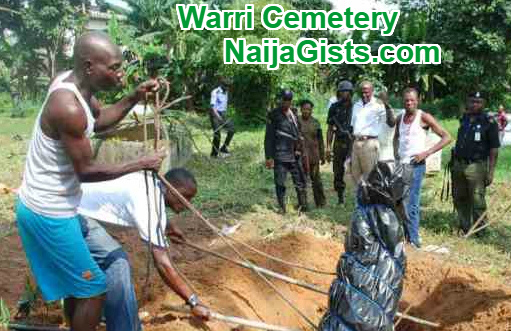 Oct 12, 2016 – Chaos As Pregnant Girl Wakes Up During Funeral At Warri Cemetery In Delta State

Pandemonium broke out in Warri Delta State yesterday when a 15-year-old girl suddenly woke up during her funeral at Warri Cemetery in Delta state.

The girl whose name couldn’t be ascertained as at the time of this report woke up around 5am yesterday.

The pregnant girl reportedly went into a deep sleep after taking an abortion concoction at Warri Motor Park yesterday.

When people suspected she had died, they wrapped her in a mat and headed for the cemetery.

On getting to the cemetery, they dug her grave and placed her remains in the grave.

As they were about covering her withsand,  the girl suddenly sneezed and jumped out of the grave and started shouting.

Consequently, there was pandemonium within and outside the cemetery as people thronged to the cemetery to catch a glimpse of the resurrected girl.

She was immediately rushed to a church in the area for deliverance.

Attempt by policemen to arrest her was rebuffed as sympathisers told police it was a spiritual case.

The girl is currently at Christ Mercyland Deliverance Ministry in Effurun Delta State.