Habiba Abubakar who is popular for dating Nigerian actors was the same woman who sued Jim Iyke last year after their romance went sour.

Since the news broke last week, Chidi Mokeme is yet to utter a word on it.

A closer look at his official Twitter page revealed that the actor has ignored the scandal.

Details of the scandal.

We learnt Hajia Habiba Abubakar, a popular Nigerian socialite who recently got dumped by her husband on the ground of infidelity secretly dated married Nollywood actor Chidi Mokeme last year.

The affair led to a pregnancy which she refused to terminate.

She travelled outside the country and delivered the baby.

She has named her baby Bilal Geoffrey Chukwudi Mokeme.

This came few months after the actor announced he is taking a break from his legal wife, a Nigerian-American lady named Jean.

According to sources, Chidi Mokeme and Habiba Abubakar became business partners when he ventured into the business of selling sex toys.

Read her statement below;

“My attention was drawn yesterday evening to a story making headlines for the past few days. I went through what has been posted in many different ways. It is very sad that people can go to any length to write whatever they feel like about just everybody or everything.
I know Chidi Mokeme and so what is news about it? We both are adults and therefore responsible for our actions, and I don’t think the media should be our referee.I’ll speak to the press when I’m ready, but for now I would like my privacy to be respected. Thanks.”

This is the first big scandal to rock the scandal-free actor. 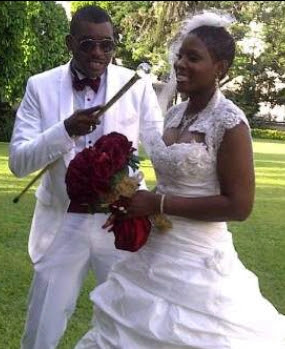 Chidi Mokeme and his wife

Wonder what his US-based wife will be thinking now.