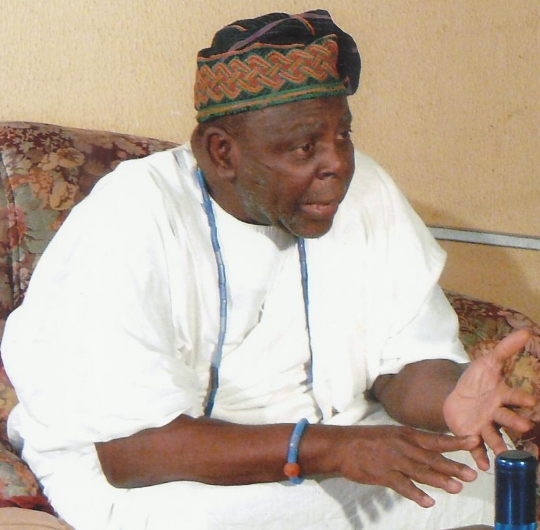 Here is an interesting story of his life he told City People’s publisher Seye Kehinde over the week.

How do you feel at 70, looking back at your life?

I will like to give thanks to God. When I look back I can’t but thank Olodumare because there are a lot of people who couldn’t make it to up to 70. There are also people who have lived beyond that so one has to thank his creator that makes it possible to live up to this age. I give thanks to Olodumare.

For very many years now your name, Yemi Elebuibon, has traveled far and wide. How were you able to build it into the big brand it is today.

Well, everything has to do with destiny. Just like one stanza in the Bible says: People live their lives according to how it has been written. Before I was born, what I am doing now had been predicted to my family. I only give thanks to Olodumare, that made me fulfill it. There are many people who have the destiny to be famous, to be great but they are unable to make it. Not everybody that are destined to be great become great or make it successfully.

Tell us what they predicted about you?

My mother was the youngest wife of my father she gave birth to one made child who is our elder Morunkola. The 2nd child was a female Ajitoni. That is an Abiku name. Sometimes they call he Gbeileyi because she used to come and go. But later she stayed. I was the 3rd one. When it was time for me to come there was a problem.

There was a period when my mother was not pregnant at all.

Sometimes when my mum gets pregnant there used to be miscarriage. Sometimes when they finally have the baby, the baby will die prematurely. This made them prepare all sort of herbal medicine for my mother. But all to no avail.

One day they consulted Ifa and the Odu Ifa revealed that a male child is going to be born. Who is going to become famous, who is going to be involved in cultural revival, the Odu Ifa give warning to my mother that she needs to abstain from using any herbal medicine. My mother had to give offering to River Osun, Enemy 5 days which is the day of Osun she will have to go to the river to fetch water home and drink that water. The potent water from River Osun made my mother pregnant. I was inside the womb, when they did another consultation. The Odu Ifa revealed that my mother must not use any medicine, only water from Osun. They said to her that the child that is going to come will be a Babalawo, and his name is going to be out all over the world.

So when I was born, they had my 3 day ceremony called Akosejaiye, that was the ceremony that gave me my name Ifayemi (To ba yemi, yi o ye ifa. To ba ye ifa, yio yemi). If it fits me it fits Ifa. So that’s why they gave me the Ifayemi I did not know all these before then.

My father started to teach me the Art and Practice of Ifa at the age of 4, but in 1957 my father joined his ancestors and they gave me to another Ifa priest, where I stayed for 10 years and 6 months. That was at Oke Popo, my Oluwo, my teachers name was Chief Faniyi Agbongbon, in Osogbo. His house was opposite Mbari Mbayo, where Duro Ladipo and Prof. Uli Bier used to work. They established Mbari Mbayo in 1962, as a cultural centre. People like Prof. Wole Soyinka, Segun Sofowote, Nwoko were all co-founders of Mbari Mbayo.

I was invited by Uli Bier and Duro Ladipo to come and join the cultural centre but I still stayed with my master I did not have, that independence I used to come casually anytime that they have a play to put on stage. They always ask me what Esa Ifa is relevant to the story, what kind of poetry they can sing during funeral rites of passage, chieftaincy title in Yoruba culture.

How did they do it?

Those are the kind of information that I used to give something unique happened the first time I came to Mbari Mbayo. Duro Ladipo was the first person to notice something about me and he told all the members of his cast. He said take a look at this man. His kind of Babalawo is going to be different. He is going to go overseas. People from oversea will come and look for him. He said as you look at him now, this boy is going to be a Babalawo that will ride a car.