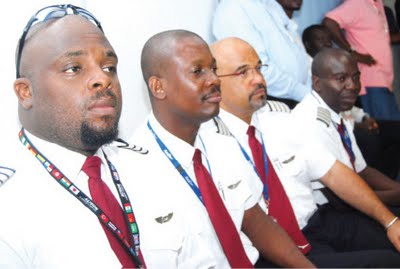 Oct 12, 2013 – Confessions Of A Nigerian Pilot “White People Should Manage Airlines In Nigeria”

The encounter was pretty fortuitous. I had gone to a have lunch at a restaurant somewhere in Ikeja GRA, and was busy doing justice to the chilled bottle of Gulder beer, while waiting for my food to be served, when the gentleman who was addressed by the friend who had accompanied him as ‘captain’ walked into the restaurant and sat right next to me.

There was a certain air of professionalism and savoir-faire about him and soon, the journalist in me- ever curious kicked in. I wanted to initiate some conversation with him- just friendly conversation. “Are you in the armed forces, since you were addressed as ‘captain’? I had asked, trying to break the ice, Displaying a willingness to also engage me, he had answered in the negative “I am an airline captain. I fly planes” he had intoned, and considering the tragedy that had occurred last week, with the crash of The Associated Airline that was conveying the corpse of the late Ondo state Governor-Dr. Olusegun Agagu to Akure, I felt a strong push to ask the captain some pertinent questions about the state of aviation given his experience as a captain and an aviator of more than 30 years as he had told me.

As most of the readers of this column would have known, I am very particular and concerned about safety and how friendly our skies are for air travel, having last year, to the glory of God, narrowly missed the Dana Air that crashed on June, 3, and my earlier experience aboard a British Airways flight from JFK, New York, to Heathrow Airport, London, in 2005 that caught fire upon take-off, but managed to make an emergency landing that was truly miraculous.

The captain was surprisingly candid and answered all my questions without hesitation. “The state of our aviation” he had told me point-blank, “is not too encouraging. We take a lot of things for granted with safety. We cut corners on things that demand strict compliance with what obtains elsewhere. For instance, there are some aircraft parts that may have ‘timed-out’ and need to be replaced with newer versions. We sometimes allow those parts to remain because they are still functional and the newer ones are too expensive. That should not be. The manufacturers of those aircrafts were conscious of the fact that at certain point, those parts need to be changed. I have seen maintenance being carried out on aircrafts in the open space as opposed to being done in hangers- that should not be. We skirt around vital issues of safety, and that again, should not be.”

I asked the captain if he had ever been pressured by his employers to fly an aircraft that he knew was not completely airworthy, but had to be ‘managed’ to the next destination. He looked at me for almost a minute and in a very concerned tone said “yes, I have” and added rather reassuringly that “that has stopped over the years and as we speak, I will not jeopardize the safety of my passengers whose lives have been entrusted under my care.”

One area the captain harped on ceaselessly was the emotional and psychological state of our pilots and how that is very critical to the safety of passengers. He went ahead to illustrate that with a personal experience. “When I used to fly with one of the airlines (name withheld) and it was run by white guys, I remember coming to work one day and did not exhibit my normal exuberant self. The MD had invited me to his office and asked what the matter was, and I told him the truth that I had a little issue with my wife that morning at home and that I was ok. He looked me straight in the eye and said I should go home and resolve the issue and return to work in three days. In his considered opinion, I was not in the right emotional/ psychological state of mine to fly and the safety of the passengers was of utmost concern to him.

How many of our operators today pay such attention to the emotional state of our pilots? I am aware of the fact that some pilots in the employ of some our airlines are owed salaries for months. How do you expect a pilot who is struggling to pay his bills and meet some basic financial obligations to his family to be in the right frame of mind to fly? Someone once told me that airline business is not supposed to be run by black people, since we seem not to pay attention to critical issues in the industry. I refuse to buy into that notion, but I must confess certain things I have seen in the industry almost has forced me to think the guy may have been right. Look at even the simple issue of parking space at our airports. Do you know that pilots don’t have parking slots at airports allocated to them, as is the case elsewhere? A pilot who is scheduled to fly say at 8 am, may have already been stressed by the time he mounts the cockpit, having already circled around for minutes, looking for parking space for his car- that is if he does not have a driver. Such minor thing can impact negatively on the pilot’s state of mind.”

When asked how safe it is to fly within the Nigerian airspace, the captain was brutally frank “It is relatively safe, I must say. But you should fly those airlines that have been audited by foreign technical partners. Any airline that you see some expatriates fly with regularly, tells you that their employers and their embassies must have been satisfied with the auditing that those airline technical partners had carried out, because those partners will not compromise safety, neither will they cut corners unnecessarily. “

As the captain made his exit, I did an analysis on what he had just told me, and I became very afraid and angry. Why should safety in air be compromised based on the need to make profit? Why would an operator willingly put an aircraft up in the sky that he knows is not airworthy? According to sources, one of the airlines whose operational license was suspended almost had a mishap because an engine packed up on a flight from Port-Harcourt to Lagos, but thank God, the second engine was able to power the plane to landing.

I hope and pray that the regulatory agencies of the industry will put the safety of passengers first over and above all other considerations. Nigerian is adopting the best practices in so many aspects of our globalized space, and these are very heartening. We must extend same to our critical sector of aviation. Air travel is considered the safest means of transportation; it should not be a scary proposition in Nigeria.