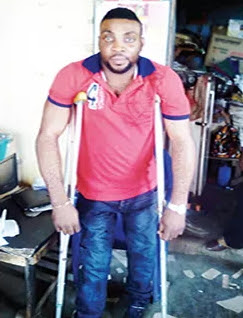 He was crippled by polio. He suffered abandonment, but moved ahead to graduate from a polytechnic. He got a job in his state- Delta but was sacked in a mass purge. Today, Nicholas Aliagwu is distraught and seeking for help. DOMINIC ADEWOLE, in Asaba, reports

The hope of new beginning for Nicholas Ngozi Aliagwu, a 33 year-old physically challenged graduate, was cut short on June 1, 2015, when the Governor of Delta State, Dr. Ifeanyi Okowa, placed all employments carried out from January 1, 2013 to May 31, 2015, by his predecessor, Dr. Emmanuel Uduaghan, through which he joined the state’s Civil Service Commission (CSC), on indefinite suspension.

With his two crutches, neatly fitted to his armpits, Nicholas joined hundreds of his colleagues, who were affected by the suspension order to protest, pray, fast and write appeal letters to beg the governor for reinstatement but to no avail. But as a man of steel and indomitable spirit, who believes that ‘possibilities for better things are endless’ and would not let anything break him down, he has remained undeterred in his hope of life despite that his dismissal from civil service halted his proposed marriage.

He was born on September 23, 1983, to the family of Pa Felix Aliagwu, at Agbor-Obi, in Ika South Local Government Area of the state, a neighbouring council area to the governor’s town in Ika North-East. Despite the fact that Nicholas crossed many hurdles before completing his primary, secondary and tertiary education before he lost the job, words of peace had not departed from his mouth as he joined millions of Deltans to congratulate the governor on his electoral victory at the Supreme Court.

His parents laboured, had sleepless nights, borrowing and staying hungry to have him sail through his school days. First, at the Ideal Secondary School, Agbor, before he gained admission into OSISATECH Polytechnic, Enugu State, until he secured the botched employment.

He was not born disabled, as many thought, but was crippled by polio meningitis when he was two years old. Ever since, he could not compete favourably with his agegrades, such that his younger ones would leave him at home to watch television and listen to radio stations while they go to school.

“The trouble of leaving me alone at home”, he lamented, “made my parents to look for admission at a close-by private primary school for me before I secured admission into Ideal Secondary School.” He battled and sailed through his secondary education and secured his WAEC and NECO certificates.

He could not make it to study Law – his dream career profession at a reputable university in Nigeria. He was hoodwinked by paucity of funds that bedevilled his parents for decades, even as his physical challenged nature was an added disadvantage.

He could not make it to the University of his dream, but was referred to OSISATECH, where persons of his kind could cope favourably with their studies, despite their challenges.

His determined limitless possibilities about life, however, paid off when he graduated from the department of Mass Communication at OSISATECH in 2013 and served under the National Youth Service Corps (NYSC) in 2014, before his new lease of life – the civil service job he got in 2015, was declared null and void by Okowa, owing to the abysmal manner the recruitment was allegedly handled.

Okowa nullified his employment alongside thousands of others in a reference letter, tagged, GHA16 Vol. VI/154, forwarded to the state’s Head of Service, Sir Patrick Origho, having alleged that the process of the recruitment was fraught with sharp practices, ranging from abuse of office to sale of jobs slots to bribery and corruption.

“Therefore, the process cannot by any stretch of imagination be adjudged credible. No flawed process produces a credible exercise. More so, it was not logical that a state struggling to meet its payroll obligation should employ more persons”, the governor maintained.

The governor also explained in a letter, dated June 22, 2015, addressed to the Speaker of the state’s House of Assembly, Rt. Hon. Monday Igbuya, that the dilemma of a huge bank and capital market debts of about N96.62 billion with a scheduled monthly repayment of N4.6 billion and also the state’s Infrastructure Development Bond of N50 billion, which he inherited on May 29, 2015, did not allow for recruitment of more workers.

The governor equally lamented the tight spot he found himself since he assumed office on May 29, 2015 where the state’s workforce as at May 28, 2015, stood at over 62,000 persons with a monthly personnel cost of N7, 437,940,015.38 inclusive of the N678 million state government’s support to local government councils for the payment of primary school teachers’ salaries, when Federal allocation to the state had dropped below N7 billion monthly.

Hence, the governor said it would be out of place for a state that is grappling to pay its workers to start recruiting. Sympathetic about Nicholas’ fate, the state chairman of the Nigeria Labour Congress (NLC), Comrade David Ofoeyeno, who doubles as the state President of the Nigeria Union of Local Government Employees (NULGE), said the governor should have exercised caution before sacking them.

According to Ofoeyeno, government should quickly resolve the impasse surrounding the recruitment saga and reinstate those vindicated. “Government ought to have restrained its suspension order, particularly as it affects those public officers employed between 31st December, 2013, on account that they have been on the pay roll for over one year”, he said.

This came after the sacked workers, under the aegis of the Congress of Newly Employed Civil Servant (CNECS), Delta State Chapter, led by their chairman, Comrade Regha Obus and Agba Okeme (Secretary) and 14 others, visited the Office of the Governor on Labour and Servicom, headed by Comrade Mike Okeme, appealing to the governor to have mercy and recall those employed on merit.

But ever since, the gloom written all over Nicholas’ face and other affected persons has not given way to a radiant smile. Nicholas said they were consoled by the fact that since the world has not completely crumbled, the possibilities for better things are not endless.

This informed why Nicholas told the New Telegraph last week in Asaba that since he defiled his disability to campaign and vote for the governor last year during the governorship election that produced him, he and hundreds of others that originated from Delta State and genuinely got the job would be reinstated.

He said: “We followed him (the Governor). We campaigned for him. We voted for him. We defended our votes and ensured that they counted. We celebrated him and rejoiced with him on the day of his inauguration. We believed the righteous man has been enthroned.

Even when the Supreme Court reaffirmed his victory recently, we congratulated him. “When I got the job on April 20, 2015, and I was posted to the Ministry of Information for my primary assignment, I felt a sense of belonging for the two months that I worked in that ministry.

I was happy I had become a full-fledged man, having hope of getting married, raise my own children and take good care of my family before my hope was dashed again.”

He said, although, the governor took his new hope of life (job) and shattered the dreams of many others on the recruitment exercise, especially those that had proposed to get married, his hope that the governor would re-absorb them had not wavered for one day.

He continued: “I am helpless and forlorn. I am appealing to the governor to reinstate those of us who are true Deltans, of which I am one, on the recruitment list. The governor should pity my poor background, my humble state, my condition. I pray daily to God to let my condition appeal to his emotion to have mercy on those of us affected who genuinely got the employment on merit before it was put on hold.”