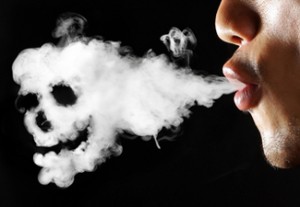 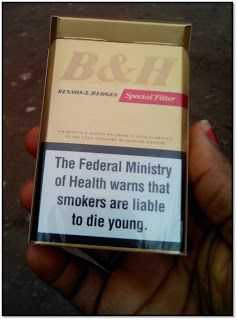 Have you tried holding a pack of Benson and Hedges in your hands? I still remember visiting the mallam’s kiosk to inquire about the price of cigarettes and I was able to get an empty pack from him. Holding the pack almost made me feel like I had just won a trophy. The pack is plated in gold and the edges are perfectly folded. When you lift the partially detachable lid along the slant divide by the sides, the word that best describes what you see is – Flawless.
I can say that what I held in my hand was designed to be comely and attractive. An addictive product packaged attractively and with comeliness will win the heart and mind of its users and effortlessly record new converts.

Without a doubt, no responsible and concerned Nigerian citizen would want to have a product proven to be the world’s leading cause of preventable death to be so gracefully packaged and presented to the general public but sadly, that is what is currently obtained in our country.
Nigeria had actually made some major attempts at regulating the tobacco industry in order to discourage the deadly act of smoking. The most notable one was in 1990 when the Tobacco Smoking (Control) Act was enacted and it is as a result of this law that cigarette packets now bear the amount of tar and nicotine contained in them. The law also got us familiar with these sentences- · “The Federal Ministry of health warns that tobacco smoking is dangerous to your health”· “Smokers are liable to die young”

The Advertising Practitioners Council of Nigeria (APCON) went a step further in August 2011 when it banned the advertising or promotion of tobacco products on television and restricted advertisement in print, billboards and on radio. Although the move was opposed in some quarters which led the council to extend the deadline for enforcing the ban from January 1, 2001 to January 1, 2004, the ban is largely in effect across the country today. I guess the APCON ban explains why the jingle “Siga Target o, na wa, siga target o na super” ceased on radio and why Golden Tones concerts have long stopped paying the bills in Nigeria’s showbiz industry.

It will interest you to know that the African continent has been recording increase in smoking rate (4.7% annually) while other parts of the world such as North America and Western Europe are seeing notable decrease in smoking prevalence. This shows we need to institute stronger measures that will produce the much desired results of 0% increase in new adopters and decline in number of people who smoke.

for the privilege of those who may not know, second-hand smoke is a mixture of the smoke given off by the burning end of a cigarette and the smoke exhaled by smokers. It is also often referred to as Environmental Tobacco Smoke.

You may have been treating the issue of second-hand smoke with triviality and not have made any attempt to protect yourself and loved ones. If you are yet to ensure people don’t smoke around you or you still frequent settings where people smoke, you should know that you are endangering your life significantly.

Based on diverse researches conducted over the years, it has been scientifically proven that second-hand smoke impacts negatively on the health of non-smokers and in particular, has debilitating effects on children and pregnant women. It is important for us to be informed of these effects so that we will all have a better understanding of why Nigeria is in dire need of instituting and enforcing a smoke-free country.

I have compiled various health effects of inhaling second-hand smoke (SHS) and they are presented below:SHS immediately affects the heart, blood vessels, and blood circulation in a harmful way:

– A short time in a smoky room can cause your blood platelets to become stickier, damage the lining of blood vessels, decrease coronary flow velocity reserves, and reduce heart rate variability.

– SHS causes lung cancer in people who have never smoked. Even brief exposure can damage cells in ways that set the cancer process in motion. (SHS is classified as a “known human carcinogen” (cancer-causing agent) by the International Agency for Research on Cancer (IARC), a branch of the World Health Organization. In the United States, approximately 3,000 lung cancer deaths are known to occur annually among adult non-smokers as a result of exposure to SHS.

– Persons who already have heart disease are at especially high risk of suffering adverse affects from breathing SHS, and should take special precautions to avoid even brief exposure.

– Exposure to SHS while pregnant increases the chance that a woman will have a spontaneous abortion, stillborn birth and other pregnancy and delivery problems.

– Mothers who are exposed to SHS while pregnant are more likely to have lower birth weight babies, which makes babies weaker and increases the risk for many health problems.

– Babies exposed to SHS after birth have weaker lungs than other babies, which increases the risk for many health problems.

– It causes acute lower respiratory infections such as bronchitis and pneumonia in infants and young children.

– Exposure to SHS can cause new cases of asthma in children who have not previously shown symptoms.

– It makes children who already have asthma to experience more frequent and severe attacks.

– Smoking by parents can cause wheezing, coughing, bronchitis, and pneumonia, and slow lung growth in their children.

– Children exposed to SHS are at increased risk for ear infections and are more likely to need an operation to insert ear tubes for drainage.

Finally you should know that there is no safe level of exposure to secondhand smoke. Inhaling even a little of it can be harmful to your health.